St. Gregory Palamas: On the Translocation of the Prophet Elijah 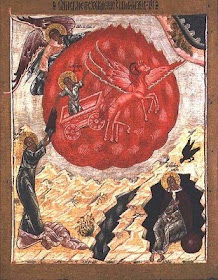 By Metropoitan Hierotheos Vlachos
The words of St. Gregory Palamas can bring to mind that only the Theotokos is in heaven with Christ, and bodily, in connection with the taking up of the Prophet Elijah, since we know from the Bible that Elijah too was taken up to heaven with his body. But St. Gregory amazingly interprets this point as well. Speaking of the Ascension of Christ and especially saying that while there are many ascensions, Christ's ascension is unique, he also refers to the case of the Prophet Elijah. He writes: "But neither did he exceed the bounds of the earth's atmosphere; the ascension of each of them was a raising from the earth without being taken from the surroundings of the earth...." From this interpretation it appears that the taking up of the Prophet Elijah was in some way a translocation, we could say that it was a kind of death, and that of course in being taken up he did not go beyond the limits of the earth's atmosphere. Therefore only the Panagia was resurrected and taken up bodily into heaven, and is glorified with her Son, as His mother, in her human nature.

Read also: Did the Prophet Elijah Actually Ascend 'Into' Heaven?