"Miracles By The Holy Belt": The Prologue 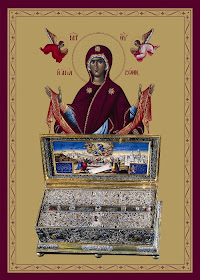 The works of God and His Saints, which cannot be rationally explained, are called miracles. God performs miracles ad infinitum. This is revealed by our Lord Jesus Christ who says: “My father is working until now” ( John 5:17). By His uncreated energies God provides, preserves and controls the whole universe, the whole creation. That is, God preserves the creation in the mint condition He had created it. He conserves and protects it by His divine providence. Therefore, God’s uncreated energies are constantly and incessantly being revealed in the physical world and cause natural and physical results. Therefore, we are living a constant miracle. All of our abilities are being set in motion by God’s will. If God withdraws His energy from one of our abilities, we are going to lose it. Now I am able to see. I can see because God allows it. If God withdraws His energy I will become blind.

According to the teachings of the Fathers of the Church there are no physical laws (by which nature is being governed) but only spiritual or uncreated laws. The creation remains in existence because it participates in the uncreated, life-giving, provident energy of God. God, Who has created the world out of nothing, has not abandoned it, but governs it by His energies. Sometimes we are able to perceive certain stability in the way His uncreated energies are being expressed and revealed. This is how God wants to act. Man explores this stability, acknowledges it and calls it “natural laws” in his effort to make sense of the physical world. That’s why when people come to perceive the performance of miracles they explain it as God’s intervention in the operation of physical laws. However, a miracle is not the result of God’s intervention in the operation of physical laws, but it is a result of His uncreated Grace on His creation: “When You open Your hand, they are filled with good things, when You hide Your face, they are dismayed” (Psalm 103:28, 29).

Only God has the ability by His very nature to perform miracles. The Saints perform miracles because of the grace they have received from Him. The energy with which they perform the miracles is not their own, but God’s energy. Therefore, the Most Holy Mother of God, as the holiest of the holy, performs miracles more than anyone else - and not just that. All spiritual virtues are being transmitted through her both towards the angels and towards people. She comes second only after the Holy Trinity. After the honor to the Holy Trinity, honor is ascribed to the Most Holy Lady as “being higher than the Cherubim and consummately more glorified than Seraphim”. Since she is being granted the second place after the Trinity, she can attain whatever she wants. As the hymn to our Most Holy Lady, the Theotokarion, says: “You have the ability to achieve whatever you want”.

Our Most Holy Mother, besides her love and her goodness, has also an infinite capacity to assist us. Why? Saint Nikodemos the Hagiorite, who is regarded as a loving friend (Θεοτοκόφιλος) of the Mother of God, explains the reason for this in his work “Eortodromion” (Book of Feasts).

The 9th Ode of the Pentecost Canon says: “Virgin Mother of God, you, who became pregnant without your virginity being corrupted and have lent your flesh to the Word of God, the Creator of all”. Explaining this troparion, the Saint refers to that which the Mother of God has lent to her Son, which made Him forever indebted to Her.

“Notice that the hymn writer did not say that the Virgin ‘has given’ or ‘has provided’ or any other similar word, but that she ‘has lent’ her flesh to the Creator Word of the Father, to show that the Mother of God had made the Son of God indebted to her with her loan. Because He has borrowed from her - not an external monetary loan, or a loan of buildings, which may be returned - but an intrinsic part of her very existence; from her physical and most pure blood. Therefore, as a physical loan it is eternal. Thus the Son of God is now forever indebted to His Mother. What can we deduce from this? Since the Son of God is forever indebted to His Mother, foremost and necessarily He must glorify her with all divine glory and honor, which He has never bestowed on any other being. Secondly, He must accept her requests and supplication... Did you grasp, my dear friend, the Virgin’s glory? Did you grasp her splendor?”

In the present book we cite the miracles which the Most Holy Mother of God has performed by her Holy Belt, which is full of grace. All the miracles are being described by those who have been blessed by them, in letters they have sent to our Holy Monastery. These people do not bury grace, they confess their benefaction. Some other people have testified verbally about the cures they have received, when we have transferred the Holy Belt to the various regions for people to venerate, but did not put them in writing. A large number of the letters we possess bear the names, the addresses even the telephone numbers of the senders. When we possess such personal details, we pass them on. Out of the whole content of the letters we only publish the part which refers to the miracles.

The Holy Scriptures use a better term to describe a miracle: the term ‘sign’. The sign reveals, it points to someone. It reveals God. The miracle is good not because somebody is being cured, but simply because it reveals God to people. This is the most essential element. We usually pay attention to the first element, the cure, which is something less significant and we do not see the revelation of God’s glory, which is the most important part.

It is this personal experience of God’s presence in their lives, which the Christians, who have been granted the beneficial energies of the Most Holy Lady, are confessing. The most beneficial outcome of the miracle was the wonder of their return and their repentance, as well as God’s revelation. A number of the beneficiaries had either loose ties with the Church or none at all. After the benefaction, they have shed tears, realizing their mistake and their spiritual poverty. They now live in repentance and are struggling.

Elias Miniatis has said something very touching regarding the protection offered by the Mother of God to the faithful, especially to those suffering and being afflicted.

“You, the orphans, who have been deprived of your parents; parents who have been deprived of your children; spouses who have lost your partners; foreigners who have lost your country; afflicted, who are in pain; you, who are sad, enslaved and sinners, be sad no more. You have a mother; the Mother of God: A Mother, who guides you in your loss; who consoles you in your sorrow; who cures your passions; who forgives your sins. Do not despair. You have a Mother, the Mother of pain; the Mother of God. You, Christians, young or old, priests and laymen, the elderly, men, women and the ailing, all of you, who worship her Crucified Son, you must lodge your appeal to her. So that she will soften your pain and you will be able to carry your cross, your pain and your sorrow”.

We pray that the publication of the present book by our Holy Monastery will strengthen those who are shaky in their faith and bring joy to the faithful, increasing their love towards the most celebrated Mother of God.

The Abbot of the Great Holy Monastery of Vatopaidi