Separation of Church and State Rooted in American Christianity 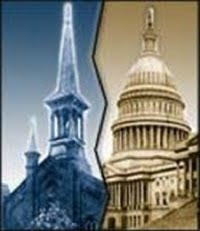 Many Americans are worried that America’s Christian heritage is being threatened. Even if the threat is more perceptual than actual, it has mobilized important religious leaders and politicians to question the separation of church and state.

The state risked becoming subject to religious controversies that would threaten its ability to protect individual liberty. Equally important, many Protestants viewed church-state alliances as a way to offer a particular sect — such as Congregationalists in New England — special privileges, rather than to permit various denominations to practice their religion peaceably.

There were also theological reasons to separate church from state. To early Americans, Protestant Christianity was premised on a personal relationship with God. Making the state an intermediary would destroy that close relationship. As Christians, they worried that the state or the established church would speak in God’s name and could mobilize the force of law to enforce religious creeds.

Moreover, established churches risked becoming tools of the state rather than of salvation, favoring the affairs of this world over the next world. The principle behind religious freedom was always to ensure that individuals could follow the dictates of their own conscience. To impose belief was to threaten the essence of Protestantism.

Colonial and Revolutionary-era America was also pluralistic. Despite the existence of state-supported churches in New England and the South, every colony had multiple denominations. In Pennsylvania and New York, religious diversity made it politically impossible to favor a particular denomination. After the Revolution, efforts to impose a particular confession in a diverse society seemed to violate the rights and liberties that the Revolution had promised all Americans.

In New England, where public opinion was strongest for tax-supported religion, pluralism convinced these states to disestablish their churches — in 1818 in Connecticut, 1819 in New Hampshire, and 1833 in Massachusetts.

But it was not just pluralism that led to disestablishment. In Massachusetts, for example, the most conservative Congregational ministers sought to separate church from state because, increasingly, they believed that the right of a religious community to set the terms for membership trumped the benefits of tax support. With tax support came the obligation to serve all members of the community and to accept the decisions of the majority. The result, according to one minister in 1828, was to enslave the church to a “civil master.”

In the Revolutionary era the lessons of history, the ideals of the Revolution, the principles of Protestantism, and the reality of pluralism convinced Americans that the Christian religion would be better secured by separating church from state. By denying or forgetting the Christian roots of the separation, Americans risk rejecting one of the great foundations of both American liberty and American Christianity.

Revolutionary-era Americans understood that the state could not interfere with the dictates of conscience without becoming tyrannical, a lesson we might learn today by looking at religious politics around the world. By upholding the separation of church and state, on the other hand, we can affirm both our political and our religious heritage.

Johann Neem is associate professor of history at Western Washington University and a writer for History News Service. He is author of Creating a Nation of Joiners: Democracy and Civil Society in Early National Massachusetts (Harvard University Press, 2008).
John at 5:01:00 AM
Share
‹
›
Home
View web version