A Photograph of the Prophet Elijah? 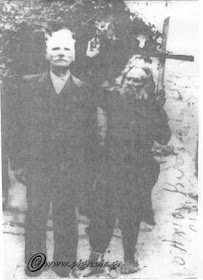 By John Sanidopoulos
Many Greek websites claim the photo above to be a photo of the Prophet Elijah. In reality, this photograph is photoshopped with an image of Haralambi the Fool for Christ who lived in Kalamata in the mid-20th century. The original photo can be seen here together with the story of Haralambi.

As the fictional story goes, it was December of 2005. A woman in Athens saw an old man outside her window looking through her garbage. Thinking it was a homeless man (though with unusual features), she went downstairs and called for him to come into her home so as to offer him some coffee and something to eat.

"Good, my child. I will come up", he responded as he went into her home.

By the time she made the coffee for him, however, as she turned around, she saw that he had disappeared. She looked out her window and again saw him at the spot where she first noticed him.

The woman called out for the man again to come up, so he did. She offered him the things she had prepared, but he instead pulled out of his pocket a valuable jewel and told her to sell it to buy the ticket she needed to go see her brother in America, whom she had not seen in years and both very much desired to see each other. She was prevented from seeing her brother because she could not afford the travel expenses. It was then that the stranger told her that he was the Prophet Elijah, and he disappeared. With joy she made her plans and visited her brother as she was told.

When she arrived in America her brother showed her a photograph he had taken 20 years earlier when he had traveled to the Holy Land but had now hidden it away. He had not told anyone about it, but he trusted his sister and wanted to show it to her. It was a photo he had someone take of himself to remember his trip to the Holy Land, but with astonishment he had noticed that next to him was a man who was not there when the photo was taken. For some reason, he interpreted this man to be St. Kosmas Aitolos, and in fact he wrote this on the side of the photo.

He showed this photo to his sister and revealed his story as well as his interpretation of it being in his mind St. Kosmas Aitolos. But his sister upon seeing the photograph jumped up and exclaimed that it was the Prophet Elijah, and she explained everything. She had recognized him immediately as the man whom she invited into her home and through whom her trip to see her brother was made possible.

I do not know what intention was behind this story and the photoshopping of this image. One thing it does show is the need to check our sources and employ a certain level of skepticism when encountering such evidence that may be a bit too fantastical and too good to be true.