How About A New Slogan? 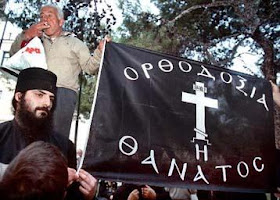 "Orthodox" Extremists have a slogan which reads "Orthodoxy or Death", and frankly, it has become a bit tiresome. Despite a well-meaning application by some, it still has its origins in an arrogant polemical stance of so-called "Orthodox Zealots" against other Orthodox Christians whom they think are less Orthodox than they are. Specifically it was aimed at the Ecumenical Patriarchate, whom they practically consider an agent of the Antichrist, yet it also applies to other clergy and laity of the Orthodox Church who disagree with their idealistic notions of Orthodoxy which only exist to serve their own egos. In other words, they want everyone to know that if "Saul has killed his thousands", that is, if the majority of Orthodox only have a portion of the truth, then they want everyone to know that "David has killed his tens of thousands", which is to say that their few have preserved Orthodoxy supposedly with exactitude and purity. A slogan like "Orthodoxy or Death" thus becomes a means to drive other Orthodox to jealousy over their supposed authenticity. In reality they have developed a persecution complex by declaring that they would rather die than become like other "lukewarm" Orthodox who have lost the fire of their zeal.

"The Pharisee stood and prayed thus with himself, 'God, I thank thee, that I am not as other men are, extortioners, unjust, adulterers, or even as this publican. I fast twice in the week, I give tithes of all that I possess' And the publican, standing afar off, would not lift up so much as his eyes unto heaven, but smote upon his breast, saying, 'God be merciful to me a sinner'." (Luke 18:11-13)

Of course, such stands are nothing new to the Church. So-called Zealots have always existed within the Church, and the Lord has His way of dealing with them by exposing their schismatic ways when He finds it appropriate. He did it with the Judaizers, He did with the Donatists, He did it with the Novationists, He did it with the Bogomils, He did it with the Old Believers, and He is doing it with the schismatic Old Calendarists - all well-known groups who caused confusion within the Church by proclaiming a purer Orthodoxy over and against the Church at large, whom they charge with heretical teachings where no heresy in fact exists except in their extremist imaginations which are infected with the venomous snake of "zeal without knowledge", which can only be healed with the antidote of wisdom, love and humility. We ought to heed our Lord's words and be "wise as serpents", that is, not biting at a false enemy and being over-territorial out of irrational fear, and we ought to couple this with being "harmless as doves".

So how about a new slogan? Or should we call it an anti-venom? How about...

After all, ought not Orthodoxy be the death of one's ego.

But then again, whatever happened to "Jesus Christ Conquers"? It takes the focus off US and puts it back on HIM.

Since slogans are a part of our human fabric, it would probably be best to have a slogan which we ought always have on our lips...

"Glory to God for all things!"

It's no wonder that St. John Chrysostom died with these words on his lips, since they sum up the purpose of our existence, which is to glorify God instead of our ego's.