Saint David of Gareji and His Monastery 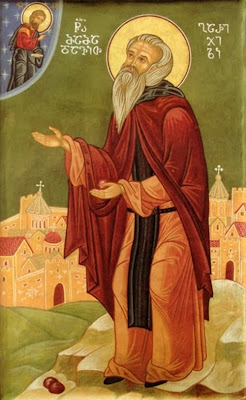 
Saint David of Gareji was Syrian by birth. The future ascetic became a disciple of St. John of Zedazeni and journeyed with him to Georgia. St. David and his spiritual son Lucian settled on a mountain above Tbilisi, the capital of Kartli.

At that time Kartli was constantly under threat of the Persian fire-worshippers. St. David would spend entire days in prayer, beseeching the Lord for forgiveness of the sins of those who dwelt in the city. When he was finished praying for the day, he would stand on the mountain and bless the whole city. Once a week Sts. David and Lucian would go down into the city to preach. A church dedicated to St. David was later built on the mountain where he labored.

St. David’s authority and popularity alarmed the fire-worshippers, and they accused him of adultery, in an attempt to discredit him in the eyes of the people. As a “witness” they summoned a certain expectant prostitute, who accused him of being the child’s father. Hoping in God, the holy father touched his staff to the prostitute’s womb and ordered the unborn child to declare the truth. From out of the womb the infant uttered the name of his true father.

Outraged at this slander, the bystanders savagely stoned the woman to death. St. David pleaded with them to stop, but he was unable to placate the furious crowd. Deeply disturbed by these events, St. David departed the region with his disciple Lucian.

The holy fathers settled in a small cave in the wilderness and began to spend all their time in prayer. They ate nothing but herbs and the bark of trees. When the herbs withered from the summer heat, the Lord sent them deer. Lucian milked them and brought the milk to St. David, and when the elder made the sign of the Cross over the milk it was miraculously transformed into cheese.

Shaken by the holy father’s miracle, Lucian told him, “Even if my body rots and wastes away from hunger and thirst, I will not permit myself to fret over the things of this temporal life.”
The fathers kept a strict fast on Wednesdays and Fridays—they ate nothing, and even the deer did not come to them on those days.
A frightful serpent inhabited a cave not far from where they lived and attacked all the animals around it. But at St. David’s command the serpent deserted that place.

Once local hunters were tracking the fathers’ deer, and they caught sight of Lucian milking them as they stood there quietly, as though they were sheep. The hunters paid great respect to St. David and, having returned to their homes, reported what they had seen.
Soon the Gareji wilderness filled with people who longed to draw nearer to Christ. A monastery was founded there, and for centuries it stood fast as a center and cornerstone of faith and learning in Georgia.
After some time St. David set off on a pilgrimage to Jerusalem. He entrusted Lucian to fulfill his responsibilities at the monastery and took some of the other brothers with him. When the pilgrims were approaching the place called the “Ridge of Grace,” from which the holy city of Jerusalem becomes visible, St. David fell to his knees and glorified God with tears. Judging himself unworthy to follow in the footsteps of Jesus Christ, he was satisfied to gaze upon the city from afar.

Then he stood at the city gates and prayed fervently while his companions entered the Holy City and venerated the holy places. Returning, St. David took with him three stones from the “Ridge of Grace.” That night an angel appeared to the patriarch of Jerusalem and informed him that a certain pious man named David, who was visiting from afar, had taken with him all the holiness of Jerusalem.
The angel proceeded to tell him that the venerable one had marched through the city of Nablus, clothed in tatters and bearing on his shoulders an old sack in which he carried the three holy stones. The patriarch sent messengers after the stranger with a request that he return two of the stones and take only one for himself. St. David returned the two stones, but he declined the patriarch’s invitation to visit him. He took the third stone back with him to the monastery, and to this day it has been full of the grace of miraculous healing.

After St. David brought the miraculous stone from Jerusalem, the number of brothers at the monastery doubled. The venerable father ministered to all of them and encouraged them. He also visited the cells of the elder hermits to offer his solace. In accordance with his will, a monastery in the name of St. John the Baptist was founded in the place called “Mravalmta” (the Rolling Mountains).
The Lord God informed St. David of his imminent departure to the Kingdom of Heaven. Then he gathered the fathers of the wilderness and instructed them for the last time not to fall into confusion, but to be firm and ceaselessly entreat the Lord for the salvation of their souls.
He received Holy Communion, lifted up his hands to the Lord, and gave up his spirit.
St. David’s holy relics have worked many miracles: approaching them, those blind from birth have received their sight. To this day, believers have been healed of every spiritual and bodily affliction at his grave.

Source
About the Monastery of Saint David


Saint David Gareji is a rock-hewn Georgian Orthodox monastery complex located in the Kakheti region of Eastern Georgia, on the half-desert slopes of Mount Gareji, some 60-70 km southeast of Georgia's capital Tbilisi. The complex includes hundreds of cells, churches, chapels, refectories and living quarters hollowed out of the rock face.
The complex was founded in the 6th century St. David Garejeli, one of the thirteen Assyrian monks who arrived in the country at the same time. His disciples, Dodo and Lucian expanded the original lavra and founded two other monasteries known as Dodo's Rka (literally, "the horn of Dodo") and Natlismtsemeli ("The Baptist"). The monastery saw further development under the guidance of the 9th century Georgian saint Ilarion. The convent was particularly patronized by the Georgian royal and noble families. The 12th century Georgian king Demetre I, the author of the famous Georgian religious hymn "Thou Art a Vineyard", even chose David Gareji as a place of his confinement after he abdicated the throne.
The high artistic skill of David Gareji frescoes made them an indispensable part of world treasure. From the late 11th to the early 13th century, the economic and cultural development of David Gareji reached its highest phase, reflecting the general prosperity of the medieval Kingdom of Georgia. New monasteries Udabno, Bertubani and Chichkhituri were built, the old ones were enlarged and re-organized.
With the downfall of the Georgian monarchy, the monastery suffered a lengthy period of decline and devastation by the Mongol army (1265), but was later restored by the Georgian kings. It survived the Persian attack of 1615, when the monks were massacred and the monastery's unique manuscripts and important works of Georgian art destroyed, to be resurrected under Onopre Machutadze, who was appointed Father Superior of David Gareji in 1690.
After the violent Bolshevik takeover of Georgia in 1921, the monastery was closed down and remained uninhabited.
The monastery remains active today and serves as a popular destination of tourism and pilgrimage.
Read more here, here and here. 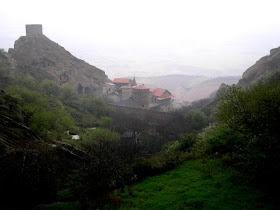 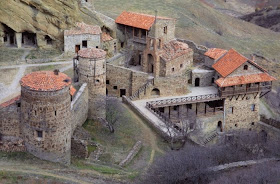