Bartholomew I Seeks To Restore Rights For Minorities 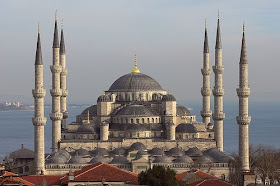 Bartholomew I Demands Redress For Wrongs Suffered In Istanbul, Imvros and Tenedos

Meeting a commission for minority rights, the Ecumenical Patriarch stresses that it is time to move from words to action, restoring the rights of minorities and in particular their schools. The pogrom against Christians in Imvros and Tenedos, now reduced to only 300 people. Perhaps Turkey's European dream is fading while the desire for neo-ottomanism grows.

Istanbul - At a recent meeting with the authorities in Ankara, Patriarch Bartholomew I reiterated the need to "right the wrongs suffered by the Christian minority in Istanbul, Imvros and Tenedos, over the years."

It is the first time that a such a large committee - 20 members – has visited the Phanar to review the progress of the Turkish administration on respect for minority rights.

The Ankara delegation to the May 20th meeting was headed by Ambassador Volkan Bozkir (from Kemalist circles), Secretary General of the President’s Council for European Affairs.

The meeting was also attended by representatives of Orthodox Christian minorities, thus starting a cycle of meetings that the Committee will also hold with other minorities in the future.

The intervention of the Ecumenical Patriarch has shown once again that he has in fact become a reference point for all those citizens who fight for civil liberties.

Some criticize his courageous stance, accusing the Phanar of becoming a source of intrigue against the integrity of the Turkish Republic. Bartholomew responded by noting that "the presence of the Ecumenical Patriarchate in this land dates back 17 centuries and is the oldest institution in this historic city. Like it or not, the patriarchal seat is the centre of orthodoxy and contributes to the city’s appeal”.

The patriarch called for the return of three historic churches of the Galata district, confiscated by the state in the twenties and delivered to the so-called " Patriarch of Turkish Orthodox, Pope Eftim, a patriarchy invented by Kemal Ataturk in order to attract Turkish Orthodox. This patriarchate was practically reduced to a pantomime, and finally to an Erenerol family matter, direct heirs of Pope Eftim, whose last descent, daughter Sevgi Erenerol was arrested for involvement in the Egenekon affair.

Bartholomew underscored the issue of confiscated properties of religious foundations (mazbut), whose total return - according to recent information - is not encouraging, the upgrading of closed school buildings, now without pupils (the Orthodox minority has been reduced to 3,000 individuals), the reopening of the Halki Theological School.

Finally, the patriarch suggested the possibility of reopening an elementary school for the needs of the tiny minority on the islands of Imvros and Tenedos (300 people). These islands were inhabited exclusively by Christian populations (12,000) and according to the Lausanne Treaty were to enjoy full autonomy, which was never respected by the Turkish authorities.

The two islands were also the scene of several pogroms for ethnic cleansing, with the consequent confiscation of property. These historical facts were also recently reported by a group from the Turkish civil minority deeply involved in the review and historical reconstruction of this country, outside of institutional cliches. These pogroms led to the total alteration of the population of both islands. Current figures talk about 8,000 Muslims of Kurdish origin and 300 Christians.

Bartholomew’s statements have shaken diplomatic circles in Istanbul. During a meeting with Alkyol Taha, a journalist for Milliyet, the Patriarch said he believed in the government’s good will, but now expects their words to be followed by action.

Among the shaken diplomatic circles, there is a growing “infatuation” with Turkey’s intense activism. European enthusiasm is slowly withering – spurred on by the crisis currently rocking the Eurozone – and it is being replaced by the belief that Turkey can become a hub not only for energy sources but also for regional politics, dusting off a modern form of economic neo-ottomanesim, ideologically based on a "light" form of Islam, which in truth has always characterized the Turkish society.

According to some diplomats, this explains the lack of magnanimity of Turkish politics in the ability to give something away without abandoning its fatal concept of reciprocity, behind which hides a lack of civil growth. In short, in Turkey, there is only a paternalistic conception of civil rights.
John at 7:42:00 AM
Share
‹
›
Home
View web version