The Taxation of Church Property In Greece 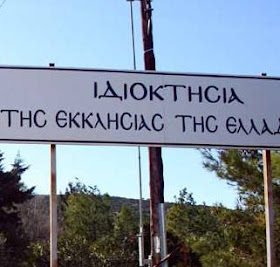 The Church Is A Natural Barrier

Like most publicly debated issues in our country, so the issue of taxation of church property is at best a superficial subject of debate and at worst a misleading subject of debate. In each case the result is confusion in the State which made terrible mistakes. The result of this confusion is the support of many poor and honest people (but obviously not close to the Church) of the taxation of church property.

If a Metropolitan or any other cleric wants to waive his salary, he has the obligation to repay the salary to the Church, not the State. Of course, it also creates the impression that they have another method by which to make a living and that any surplus from this salary was not spent on the tasks for the Church, which is not good for either the same or the Church.

If a Metropolitan or any other cleric wants to help the State with gifts or to accept unconstitutional, illegal and unfair taxation, let him do it from any private property he has, and not from the property of the Church. The hierarchy and clergy are of course entitled to manage the assets of the Church, but only for the benefit of the Church. And the Church is not entitled to assign assets to anyone. Otherwise it is committing dereliction of duty under the laws of the State relating to the NPDD and the canons of the Church. If those who made donations to the Church wanted to give it to the State, they could have given it to them on their own and do not need the Church for this purpose.

Quite to the contrary, the taxation of church property is an unpopular measure of social injustice. It more or less manages away social resources from the poor and landless to pay them less. The taxation of church property is another taxing of the poor, the wage-earner of low-income and large families. At first glance, it appears to be correct to say that any tax should be levied on the surplus, not the current deficit of the Church.

In an era of such need of the people, the Church has no means to have excess. All means must be spent in the ministry of the people. And furthermore, there is no surplus to give to enable the State to pay less, who themselves have more than those who depend on the charity of the Church.

The taxation of gifts to the Church is the apotheosis of the absurd. Those that help, either from their surplus or from what little they have, the Church in its work, is because they see it as valuable, and are required to enhance a wasteful, corrupt and inefficient State, which now says it came to its senses.

Whatever money spent by the State for schools, camps, hospitals, nursing homes, and orphanages can not reach the quality offered by the faithful volunteers of the Church. But it is highly doubtful that such a State will be interested to pursue such a social project with the resources being taken away from the Church.

However, the taxation of church property represents something else. Philanthropy originated with the birth of the Church. It didn't exist in the ancient world. It is another thing to say that all the ancient beliefs are present today as a reheated soup of last year, with some spices of philanthropy solely intended to lure naive, tired or wicked lads to draw them away from the Church (which has profited us with the freedom and dignity of the human person, which the Church preserves as the pupil of one's eye). And the Church has grown with persecutions, but has stabilized by the tax exemptions the Roman emperors gave the Church.

The taxation of the Church is a reversal of the policy of the last two millennia, and the beginning of a persecution for the Church. This a result of globalization leading to a concentration of wealth in a few hands so that few people can buy the freedom of many.

The Church is a natural barrier to this development and it should put aside the mischief and denigration of the rulers with the removal of its property and many other things we live through these days, not by random chance.

The Church, that is, the hierarchy, the clergy, monks and the faithful people, acknowledges this and are not afraid. If the Hierarchy bends, God forbid, the Church will show forth leaders from the ranks of the clergy, the monks and the laity.