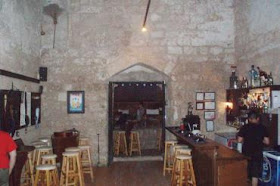 ONE DAY after the unexpected visit by Archbishop Chrysostomos II to Apostolos Andreas, Kykkos Monastery Museum said it had new evidence of the desecration of churches in the north.

During a news conference yesterday Open University of Greece professor Charalambos C. Chotzakoglou presented several examples as part of the Museum’s effort to publicise the issue.

He highlighted the case of the Virgin of Trachoni church in occupied Nicosia, which was looted during the occupation and turned into a dance school.

According to Chotzakoglou, construction crews are currently building a road next to the church and have severely damaged the western entrance and destroyed the courtyard and surrounding areas in the process.

“Today, the whole surrounding area has become a roundabout, the whole area around the church is being used as a road, and all this has been done with funds from the EU, of which we are a member state, and we have not objected,” he said.

“However we are not financing road construction through this programme in Nicosia,” he said. But Rasbash added that his colleagues were “checking to see if any projects we are financing in other sectors involve work that could possibly have damaged the Virgin of Trachoni church.” 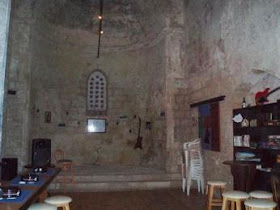 “This is an unacceptable insult to the memory of the dead and an intolerable act of the Anglican Church in Cyprus, which in the free areas enjoys the full freedom and benefit of the Church of Cyprus and the Cyprus Republic.”

In another example he said the Roman Catholic Church of San Francesco in Famagusta was now a pub while the the twin churches of the Knights Hospitallers, are nightclubs.

The church of Panagia in Acheritou had its floors illicitly excavated and fragments of medieval pottery destroyed, and the church of Saint Effimianou, whose north wall was partially demolished by illicit antiquities dealer Aydin Dikman was in the process of having its remaining frescoes destroyed, he said.

Archbishop Chrysostomos visited Apostolos Andreas on Monday after Turkish Prime Minister Recep Tayip Erdogan gave the go-ahead to conserve and restore the monastery following nearly four decades of neglect. The structure threatens to collapse in on itself if the restoration plans fail to come to fruition.
John at 1:03:00 PM
Share
‹
›
Home
View web version