Synaxarion for the Fifth Sunday of Great Lent 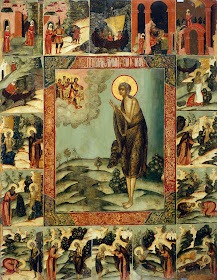 On this day, the fifth Sunday of Great Lent, we celebrate the memory of our holy and venerable Mother, Mary of Egypt.

The recorder of the life of this wonderful saint is St. Sophronius, Patriarch of Jerusalem. A hieromonk, the elder Zossima, had gone off at one time during the Great Fast on a twenty-days' walk into the wilderness across the Jordan. He suddenly caught sight of a human being with a withered and naked body and with hair as white as snow, who fled in its nakedness from Zossima's sight. The elder ran a long way, until this figure stopped at a stream and called, "Father Zossima, forgive me for the Lord's sake. I cannot turn around to you, for I am a naked woman." Then Zossima threw her his outer cloak, and she wrapped herself in it and turned around to him. The elder was amazed at hearing his name from the lips of this unknown woman. After considerable pressure on his part, she told him the story of her life.

She had been born in Egypt and had lived as a prostitute in Alexandria from the age of twelve, spending seventeen years in this way of life. Urged by the lustful fire of the flesh, she one day boarded a ship that was sailing for Jerusalem. Arriving at the Holy City, she attempted to go into one of the churches to venerate the Precious Cross, but some unseen power prevented her from entering. In great fear, she turned to an icon of the Mother of God that was in the entrance and begged her to let her go in and venerate the Cross, confessing her sin and impurity and promising that she would then go wherever the Most Pure One led her. She was then allowed to enter the church. After venerating the Cross, she went out again to the entrance and, standing in front of the icon, thanked the Mother of God. Then she heard a voice saying, "If you cross the Jordan, you will find true peace." She immediately bought three loaves of bread and set off for the Jordan, arriving there the same evening. She received Holy Communion the following morning in the monastery of St. John the Baptist, and then crossed the river. She spent the next forty-eight years in the wilderness in the greatest torments, in terror, in struggles with passionate thoughts like gigantic beasts, feeding only on plants.

Later, when she was standing in prayer, Zossima saw her lifted up in the air. She begged him to bring her Holy Communion the next year on the bank of the Jordan, and she would come to receive it. The following year, Zossima came with the Holy Gifts to the bank of the Jordan in the evening and stood in amazement as he saw her cross the river. He saw her coming in the moonlight and, arriving on the further bank, make the sign of the Cross over the river. She then walked across it as though it were dry land. When she had received Holy Communion, she begged him to come again the following year to the same stream by which they had first met. The next year Zossima went and found her dead body there on that spot. Above her head in the sand was written: "Abba Zossima, bury in this place the body of the humble Mary. Give dust to dust. I passed away on April 1, on the very night of Christ's Passion, after Communion of the Divine Mysteries." For the first time, Zossima learned her name and also the awe-inspiring marvel that she had arrived at that stream the previous year on the night of the same day on which she had received Holy Communion - a place that he had taken twenty days to reach. And thus Zossima buried the body of the wonderful saint, Mary of Egypt. When he returned to the monastery, he recounted the whole story of her life and the wonders to which he had been an eyewitness. Thus the Lord glorifies repentant sinners. She entered into rest in about the year 530.

O Christ our God, through the intercessions of our venerable Mother Mary of Egypt, have mercy on us and save us. Amen.

Read also: Why Is St. Mary of Egypt Remembered During Lent?
John at 7:41:00 AM
Share
‹
›
Home
View web version