Sermon for the Fifth Wednesday of Great Lent 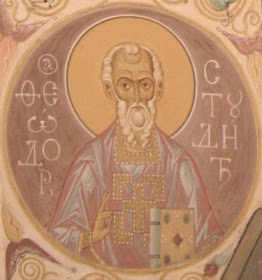 CATECHESIS 69: That Those Who Have Passed Through Life In Afflictions and Miseries Enjoy a Pleasure Which Is Without Sorrow and Ineffable.

In PG the title adds ‘In Memory of the Godly Platon’.

by St. Theodore the Studite

Given on Wednesday of the 5th week of Great Lent

Brethren and Fathers, everyone who is starting something, whether it be word or action, at the beginning has affliction and difficulty, but at the conclusion of the struggle joy and happiness. So a farmer sows with tears, as we sing, but reaps with gladness [Cf. Ps. 125:5]. The soldier as he sets out to war is depressed, but as he returns from war he is filled with joy. So we too now that we have come near the end of our abstinence, no longer remember the mortification of our former struggles, but we rejoice at our present ones and glorify the Master.

Would that you may excel in noble struggles for the time ahead. For I testify to you that you have come through the time of the fast in the right spirit, without conflict, without disturbance, obediently, in good order, each one fulfilling his service properly. And thanks be to the powerful God who has empowered you to achieve this completion. Let us then take this example, brethren, and at the completion of life here, whenever each of us rests from his works, "When Christ our life appears" [Col. 3:4.], "When He hands over the kingdom to God the Father", as it is written, "when He has abolished every rule and every authority and power" [1 Cor. 15:24]; because then the saints will have no sensation of their sufferings and struggles for the sake of virtue, but will enjoy a pleasure without sorrow and ineffable.

And who are they? The glorious fathers and prophets before the Law and under the Law, those like Abraham, those like Moses; in the time of grace, the blessed Apostles, the victorious Martyrs, the whole choir of the Saints. Among them and before them the great Forerunner, whose imitator our venerable father Platon, whose memory we are celebrating today, was counted worthy to become by denouncing the adulterous Emperor[1]. And since the disciples of a good teacher should themselves be, as the tree is known by its fruit, I beg and implore you, by the same rule, that we too may follow in the same tracks that he and the rest of our fathers and brethren followed, not abandoning our ascetic discipline nor the confession which lies before us. For you have certainly all heard what the wretched Alexander has done; he has denied his obedience and his confession. And what caused him to suffer this but that fact that he had been on his own. How do I blame those who are on their own[2] and had become a lover of money like Judas. Both of them betrayed the Lord of Glory, the one to the Jews, the other to those who think like the Jews, the Iconoclasts. Rightly the Apostle cries out: "The love of money is a root of all evils, and in their eagerness to be rich some have wandered away from the faith and pierced themselves with many pains" [1 Tim. 6:10].

I want next to rebuke some of you not unreasonably. Why so? Because, since he was a lover of power and a lover of rank, the poor fool, you connived with him, as a joke in fact, by voting for him as priest; and he, maimed by the devil, turned the game into reality. Oh how the poor wretch has suffered! He has suffered shipwreck in the faith [Cf. 1 Tim. 1:19. One of those mentioned by St Paul was also called Alexander.], he has lost the merchandise of virtue, he has grieved us too lowly as we are, he has caused as much scandal as he can to the Church of God. But may our good God, who brings from the deep of destruction the soul that has been submerged, call him back finally from his fall when he has at last repented; may He pardon you for your rashness and idle speech, and may He save us all for His heavenly kingdom, in Christ Jesus our Lord, to whom be glory and might, with the Father and the Holy Spirit, now and for ever, and to the ages of ages. Amen.

1. St. Platon was St Theodore’s spiritual father. He denounced the illicit marriages of Constantine VI. This resulted in the banishment of the two saints in 809. St Platon’s feast is on the 4th April.

2. The Greek word used here, is common in the sense of ‘solitary’, but here it means a monk who is isolated, without other brothers. The community was scattered at this time in semi-exile and St Theodore clearly had problems with monks who wanted to live on their own with all the attendant dangers.