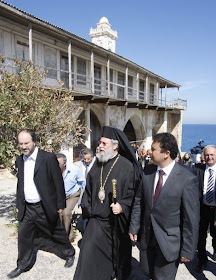 Cyprus’ Archbishop Chrysostomos II, the head of the Greek Orthodox Church in Cyprus, crossed over into the Turkish Cypriot side of divided Nicosia (Lefkoşa) on Monday morning, walking through the Ledra Street (Lokmacı Gate) crossing, which was opened in April 2008.

Chrysostomos’ first stop in the Turkish Republic of Northern Cyprus (KKTC) was the St. Barnabas Monastery in Gazimağusa (Famagusta), the Anatolia news agency reported, adding that the archbishop was accompanied by KKTC Tourism Minister Ersan Saner during his visit to the monastery.

The Greek Cypriot media highlighted that this would be the first visit by the Cyprus archbishop to the Apostolos Andreas monastery since 1974, when Turkey sent its troops to Cyprus following a Greek-inspired coup on the island. The island has been ethnically divided since then.

The same Greek Cypriot media reports also said that Chrysostomos was expected to visit the İstanbul-based Greek Orthodox Patriarchate in mid-April and is expected to meet with Turkish Prime Minister Recep Tayyip Erdoğan during this visit.

Earlier this month, the Xinhua news agency cited a high-ranking official from the Greek Orthodox Church of Cyprus as saying that Erdoğan had recently sent a personal letter to Chrysostomos in which he had given his personal approval for the conservation and restoration of the historic monastery of St. Andrew, or Apostolos Andreas, in the Turkish Cypriot north.

Xinhua had highlighted that it was the second time in a week that the Turkish prime minister made a good-will gesture toward Greek Cypriots, referring to the fact that the previous week, Erdoğan had met with Greek and Turkish Cypriot journalists in İstanbul. At the time, he told the journalists that he was genuinely interested in finding a quick solution to the long-standing Cyprus problem along lines agreed to in talks between the leaders of the Greek and Turkish Cypriot communities.