Brief Life of Saint John of the Ladder 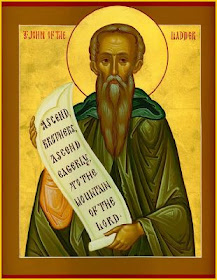 Saint John of the Ladder is honored by Holy Church as a great ascetic and author of the renowned spiritual book called The Ladder, from which he is also called "of the Ladder" (Climacus).

There is almost no information about John's origins. One tradition suggests that he was born in Constantinople around the year 570, and was the son of Sts. Xenophon and Maria (Jan 26).

John went to Sinai when he was sixteen, submitting to Abba Martyrius as his instructor and guide. After four years, John was tonsured as a monk. Abba Strategios, who was present at John's tonsure, predicted that he would become a great luminary in the Church of Christ.

For nineteen years John progressed in monasticism in obedience to his spiritual Father. After the death of Abba Martyrius, John embarked on a solitary life, settling in a wild place called Thola, where he spent forty years laboring in silence, fasting, prayer, and tears of penitence.

It is not by chance that in The Ladder John speaks about tears of repentance: "Just as fire burns and destroys the wood, so pure tears wash away every impurity, both external and internal." His holy prayer was strong and efficacious, as may be seen from an example from the life of the God-pleasing saint.

John had a disciple named Moses. Once, the saint ordered his disciple to bring dung to fertilize the vegetable garden. When he had fulfilled the obedience, Moses lay down to rest under the shade of a large rock, because of the scorching heat of summer. John was in his cell in a light sleep. Suddenly, a man of remarkable appearance appeared to him and awakened the holy ascetic, reproaching him, "John, why do you sleep so heedlessly, when Moses is in danger?"

John immediately woke up and began to pray for his disciple. When Moses returned in the evening, John asked whether any sort of misfortune had befallen him.

The monk replied, "A large rock would have fallen on me as I slept beneath it at noon, but I left that place because I thought I heard you calling me." John did not tell his disciple of his vision, but gave thanks to God.

John ate the food which is permitted by the monastic rule, but only in moderation. He did not sleep very much, only enough to keep up his strength, so that he would not ruin his mind by unceasing vigil. "I do not fast excessively," he said of himself, "nor do I give myself over to intense all-night vigil, nor lay upon the ground, but I restrain myself..., and the Lord soon saved me."

The following example of John's humility is noteworthy. Gifted with discernment, and attaining wisdom through spiritual experience, he lovingly received all who came to him and guided them to salvation. One day some envious monks reproached him for being too talkative, and so John kept silence for a whole year. The monks realized their error, and they went to the ascetic and begged him not to deprive them of the spiritual profit of his conversation.

Concealing his ascetic deeds from others, John sometimes withdrew into a cave, but reports of his holiness spread far beyond the vicinity. Visitors from all walks of life came to him, desiring to hear his words of edification and salvation. After forty years of solitary asceticism, he was chosen as igumen of Sinai when he was seventy-five. John governed the holy monastery for four years. Toward the end of his life, the Lord granted him the gifts of clairvoyance and wonderworking.

At the request of John, abbot of the Raithu monastery (Commemorated on Cheesefare Saturday), he wrote the incomparable The Ladder, a book of instruction for monks who wished to attain spiritual perfection.

Knowing of the wisdom and spiritual gifts of John of Sinai, the abbot of Raithu requested him to write down whatever was necessary for the salvation of those in the monastic life. Such a book would be "a ladder fixed on the earth" (Gen. 28:12), leading people to the gates of Heaven.

John felt that such a task was beyond his ability, yet out of obedience he fulfilled the request. The saint called his work The Ladder, for the book is "a fixed ladder leading from earthly things to the Holy of Holies...." The thirty steps of spiritual perfection correspond to the thirty years of the Lord's age. When we have completed these thirty steps, we will find ourselves with the righteous and will not stumble. The Ladder begins with renunciation of the world, and ends with God, Who is love (1 Jn. 4:8).

Although the book was written for monks, any Christian living in the world will find it an unerring guide for ascending to God, and a support in the spiritual life. Sts. Theodore the Studite (Nov. 11 and Jan. 26), Sergius of Radonezh (Sept. 25 and July 5), Joseph of Volokolamsk (Sept. 9 and Oct. 18), and others relied on The Ladder as an important guide to salvation.

The twenty-second step of The Ladder deals with various forms of vainglory. St. John writes:

"When I fast, I am vainglorious; and when I permit myself food in order to conceal my fasting from others I am again vainglorious about my prudence. When I dress in fine clothing, I am vanquished by vanity, and if I put on drab clothing, again I am overcome by vanity. If I speak, vainglory defeats me. If I wish to keep silence, I am again given over to it. Wherever this thorn comes up, it stands with its points upright.

A vain person seems to honor God, but strives to please men rather than God.

People of lofty spirit bear insult placidly and willingly, but only the holy and righteous may hear praise without harm.

When you hear that your neighbor or friend has slandered you behind your back, or even to your face, praise and love him.

It is not the one who reproaches himself who shows humility, for who will not put up with himself? It is the one who is slandered by another, yet continues to show love for him.

Whoever is proud of his natural gifts, intelligence, learning, skill in reading, clear enunciation, and other similar qualities, which are acquired without much labor, will never obtain supernatural gifts. Whoever is not faithful in small things (Luke 16:10), is also unfaithful in large things, and is vainglorous.

It often happens that God humbles the vainglorious, sending a sudden misfortune. If prayer does not destroy a proud thought, we bring to mind the departure of the soul from this life. And if this does not help, let us fear the shame which follows dishonor. "For whoever humbles himself shall be exalted, and whoever exalts himself shall be humbled" (Luke 14:11). When those who praise us, or rather seduce us, start to praise us, let us recall our many sins, then we shall find that we are not worthy of what they say or do to honor us."

In The Ladder St. John describes the ascent toward spiritual perfection, which is essential for anyone who wishes to save his soul. It is a written account of his thoughts, based on the collected wisdom of many wise ascetics, and on his own spiritual experience. The book is a great help on the path to truth and virtue.

The steps of The Ladder proceed gradually from strength to strength on the path of perfection. The summit is not reached suddenly, but gradually, as the Savior says: "The Kingdom of Heaven suffers violence, and the violent take it by force" (Mt.11:12).

St. John is also commemorated on the Fourth Sunday of Great Lent. 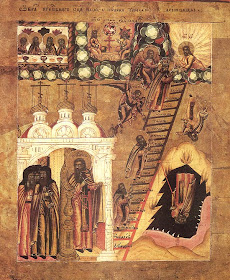 Apolytikion in the Fourth Tone
With the rivers of your tears, you have made the barren desert fertile. Through sighs of sorrow from deep within you, your labors have borne fruit a hundred-fold. By your miracles you have become a light, shining upon the world. O John, our Holy Father, pray to Christ our God, to save our souls.

Kontakion in the First Tone
As ever-blooming fruits, thou dost offer the teachings of thy God-given book, O wise John, thou most blessed, while sweet'ning the hearts of all them that heed it with vigilance; for it is a ladder from the earth unto Heaven that conferreth glory on the souls that ascend it and honour thee faithfully.
John at 11:19:00 AM
Share
‹
›
Home
View web version