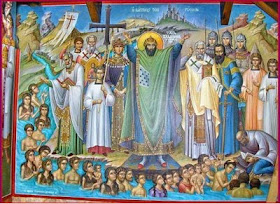 Moscow, 30 March 2010, Interfax - The percentage of Orthodox believers went up from 70% to 75% in Russia in 2009, reaching the highest level since the beginning of measurements, the All-Russia Public Opinion Research Center told Interfax.

When asked about their religious affiliation, 5% of the respondents named Islam (from 7% the year before), and less than 1% named Catholicism, Protestantism, Judaism, and Buddhism.

The overwhelming majority of Orthodox Russians (84%) have been baptized. At the same time, over one-third of those who consider themselves atheists (39%) have also been baptized.

Two-thirds of Russians (66%) perform religious rituals. However, 27% of the respondents said they only do so on holidays and 28% said they do so occasionally. This figure is higher among Orthodox believers (73% of the respondents who consider themselves Orthodox believers follow religious traditions). The percentage of those who do not perform religious rituals has gone down to 32% from 37% in 2006.

One-fourth of the respondents said they believe new people are being converted to religion. One out of five Russians believe people have simply stopped hiding their religious feelings, 16% believe it is just an outward trend, and 17% said they are not noticing any changes in people's religious feelings.

The poll was conducted on January 23-24. It surveyed 1,600 people living in 42 regions, territories, and republics of the Russian Federation.