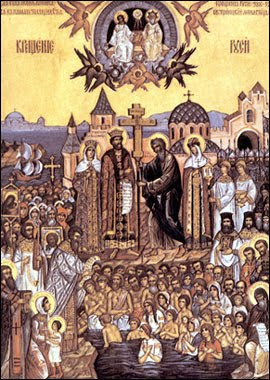 The government has proposed a new national holiday, Baptism of Rus Day, in what could be viewed as a victory of the Russian Orthodox Church in the clericalization of Russian life.

The government has submitted a bill to the State Duma that would introduce the Baptism of Rus Day on July 28, when Russian Orthodox believers commemorate Prince Vladimir, who christened Rus in 988, a Duma source told Itar-Tass on Friday.

Culture Minister Alexander Avdeyev proposed the holiday at a government meeting in February, supporting an idea voiced earlier by the church, Itar-Tass said.

The church has seen its clout grow in recent years. It has long pushed for the study of its doctrines in public schools, and next month, grade school students in 19 Russian regions will begin religious studies that focus on the four faiths labeled "traditional" in federal law: Russian Orthodoxy, Islam, Judaism and Buddhism, RIA-Novosti reported in early March.
John at 4:28:00 PM
Share
‹
›
Home
View web version