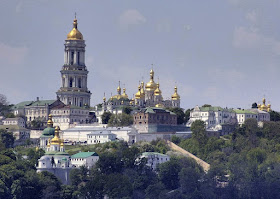 
By St. Nikolai Velimirovich
Two companions, John and Sergius, vowed to adopt each other as blood brothers before an icon of the Holy Mother of God in this monastery. John was a wealthy man, and he had a five year old son Zachariah. John became very ill. Before his death, John commended his son to the care of Sergius and bequeathed a large amount of gold and silver to him for safe keeping so that Sergius would hand it over to his son Zachariah when he reached maturity.

When Zachariah reached maturity, Sergius denied that he received anything from the deceased John. Then Zachariah said, "Let him swear before that very icon of the All-Holy Mother of God, before whom he entered into a blood-brother relationship with my deceased father; and if he swears that he did not receive anything from my father John, then I will not seek anything from him." Sergius agreed.

When Sergius swore this, he wanted to approach and venerate the icon, but a force held him back and would not allow it. Sergius then began to cry out in a crazed manner to the Holy Fathers Anthony and Theodosius; "Do not allow this unmerciful angel to destroy me!" That was the demon that attacked him by God's permission.

After that, Sergius showed them all the money that John entrusted to him. When they opened the chest, they discovered that the amount had doubled. This amount was doubled by God's Providence. After receiving the money, Zachariah gave it to the monastery and was then tonsured a monk. Zachariah lived for a long time and was made worthy of the great gifts of God and was translated peacefully into eternity.