Icon of the Mother of God of the Uncut Mountain 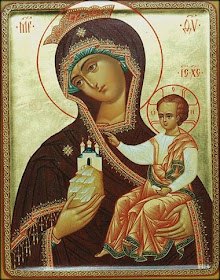 
About 250-300 years ago this icon was in one of the men's monasteries of Tver and was presented by the Superior to Cosmas Volchaninov in gratitude for his fine work in the monastery church. This icon was passed on from generation to generation, but a certain impious grandson of Cosmas removed it and placed the icon in an attic.

His bride endured many insults from her husband and his relatives. In despair over her marriage she resolved to commit suicide in a deserted bath-house. On the way there a monk appeared to her and said, "Where are you going, unhappy one? Go back, pray to the Theotokos of The Clouded Mountain, and you will live in peace."

The agitated young wife returned home and revealed everything, not concealing her interrupted intention. They searched for the monk, but they did not find him, and no one had seen him but her. This took place on the eve of the Feast of the Annunciation to the Most Holy Theotokos.

They found the icon in the attic, cleaned off the dirt and set it up in the house in a place of honor. In the evening, the parish priest served the all-night Vigil before the icon. From that time, Vigil was served in the house every year on this day.

For more than 150 years the icon was in the Volchaninov family. Katherine, daughter of Basil, the last of the Volchaninov line, married George Ivanovich Konyaev, taking with her the icon of the Mother of God as a precious inheritance. Moliebens and all-night vigils were served in the Konyaev house on March 24 and November 7 (perhaps this was the day when the icon was transferred from the monastery to the house of Cosmas Volchaninov).

In 1863 near a cemetery church of the Smolensk Icon of the Mother of God it was decided to build a chapel in honor of St Tikhon and St Macarius of Kalyazin. The then owner of the icon, George Konyaev (who died in 1868 at the age of 97) wanted to donate the icon of the Theotokos to the church. He asked the clergy to build another chapel for the wonderworking icon of the Mother of God of the "Clouded Mountain."

He also said, "I feel the very best place for it is the temple of the Smolensk Icon of the Mother of God, since the place on which the church was built, in former times was called a Mount, since it was the highest place in the city. The inhabitants took their possessions to the Mount and saved themselves from ruin during a flood. Let the icon, The Clouded Mountain, remain on this mountain with your blessing, and let all who are buried here be veiled with Her mercy." On July 15, 1866 the icon was transferred into the new chapel, which was consecrated by Bishop Anthony of Staritsk the following day.

On the icon the Most Holy Theotokos is depicted standing on a semi-circular elevation, a mountain; on Her left arm, the Divine Infant blesses with His right hand. Upon the head of the Mother of God is a crown, and in Her hand a mountain, on which are seen above churches with cupolas and crosses.

This icon should not be confused with the "Stone of the Mountain not cut by Hands" Icon on the iconostasis of the cathedral of the Transfiguration at Solovki. The latter depicts the Theotokos in half-length, holding Her Son in Her left hand. In Her right hand, She holds a ladder and a stone with the image of Christ's head (the King of Kings). Instead of the usual stars on her head and shoulders are the heads of angels. The title of the icon is derived from Daniel 2:44-45.