The Many Dresses of Kassiani 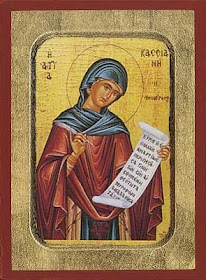 The troparion of Kassiani is very much beloved by our Orthodox people. Even people who never go to church come to hear it. This reveals the inspiration under which it was written, the passion of the sinful woman who repented, as well as the history of Kassiani who composed it. More so, in my opinion, its music moves the world, being slow and majestic, because the teachers of ecclesiastical music impressed it upon us with much love and care. Except who can say this for recent years. Now I can't understand what the majority of churches hear when they chant it, or better yet, when they sing it with an improvised manner, with a pretended type of European music, made by people without christian compunction and without any musical sensibilities, but with a dead false perception of music, which they dare say much better suits our times.

Thus the troparion of Kassiani, in many Greek churches, is chanted in an unfamiliar "modern" way. Every "modernized" chanter dresses poor Kassiani with any clothes that comes to mind, one masquerading her as an opera singer, another as a sentimentalist lady of oafish romantic tastelessness, and the majority as modern theatre: The Fine Arts, sir, go a long way today! The world asks for whatever is modern in the Church. Quackery has entered. And all these things are done out of fear that they won't call him an idiot and backward. Everything becomes a sacrifice on the altar of stupidity and false pride.

Troparion of Kassiani (Chanted by the Choir of St. John of Damascus)