The Lord Comes To His Voluntary Passion 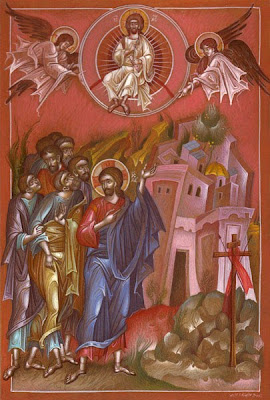 - As the Lord was coming to His voluntary passion, He said to His Apostles on the road, ‘Behold, we are going up to Jerusalem, and the Son of man will be betrayed, as it is written of Him’. Come then, let us too, with minds made pure, journey with Him, and let us be crucified with Him, and for His sake become dead to the pleasures of life, that we may live with Him and hear Him as He cries, ‘I am no longer going up the earthly Jerusalem to suffer, but to My Father and your Father, and to My God and your God. And I shall raise you up with Me to the Jerusalem above, in the kingdom of heaven’.

- Lord, as You were coming to Your passion, You strengthened Your disciples, taking them aside and saying, 'How have you not remembered My words, which I spoke to you of old, Is it not written no prophet may be killed but in Jerusalem? Now the moment has come of which I spoke to you. For see, I am being handed over to be mocked by the hands of sinners, who, when they have nailed Me to a cross and handed Me over for burial, will reckon Me a loathsome corpse. Nevertheless, take courage, for on the third day I arise, for the joy of believers and eternal life.'

- O Lord, instructing Your own disciples to think thoughts of perfection, You said, ‘Do not be like the nations, so as to rule over the least strong. It shall not be so with you, my disciples, because my wish is to be poor. The first among you, then, let him be the servant of all; the ruler as the ruled, the leader as the last. For I have come to serve Adam who became poor, and to give My life as a ransom for many, to those who cry to Me: Glory to you!’ 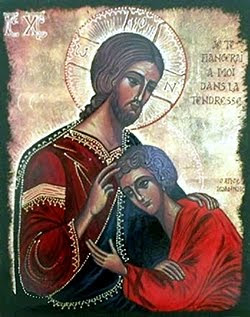 Sermon On Joy After Sorrow
by St. Nikolai Velimirovich
"So you also are now in anguish. But I will see you again, and your hearts will rejoice" (John 16:22).

The father steps up to the gallows and his sons are crying around him. Instead of the sons comforting him, he comforts his sons. Something similar to this happened to the Lord and His disciples. Walking toward His bitter death, the Lord is more saddened because of the grief of His disciples, rather than by that which He has to endure. He caresses them with consolation and encourages them with the prophecy of the new and impending vision: "But I will see you again." This is a prophecy about the resurrection.

Many times our Lord prophesied His death, but when He prophesied His death, He also prophesied His resurrection. Nothing unforeseen ever did happen to Him. He did not prophesy about Himself only, but also about them [the disciples]. They will be in great sorrow as a woman when she gives birth and endures pain. As a woman forgets her pain and rejoices when she gives birth "for a child has been born into the world" (John 16:22), so will it be with them. In their consciousness Christ the Lord was not completely in the form of the God-Man. As long as they had known Him as a sufferer and mortal man, they only knew Him partially; until then, the pain of birth lasts in their souls. But when they see Him again, resurrected and alive, miraculous and almighty, Lord over all things in heaven and on earth, the pain and sorrow will cease and joy will appear in their hearts. For Christ will be completely formed in their consciousness as the God-Man and then they will know Him in His fullness and in His totality. Only then will He be totally born for them.

So with us brethren, as long as we know Him only from His birth to His death on Golgotha, we know the Lord Jesus partially. We will know Him completely only when we know Him as the Resurrected One, the Victor over death.

O Lord All-victorious, have mercy on us and by Your resurrection cause us to rejoice as You comforted and made joyful Your disciples. Amen.
John at 8:01:00 AM
Share
‹
›
Home
View web version