Warning: Do Not Pry Into God's Judgments! 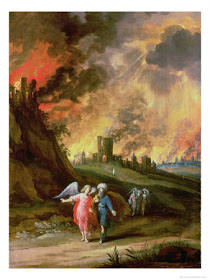 Submit yourself to the will of God and do not pry too closely into God's judgments, for you can lose your mind. The judgments of God are innumerable and unfathomable.

A monk in the wilderness, imagining that he had attained perfection, prayed to God that He would reveal to him His various judgments in the lives of men. God put the thought in his mind to go to a distant place to inquire of a spiritual elder concerning this.

However, while the monk was on his way, an angel of God in the form of an ordinary man joined him, saying that he too wanted to go to that elder. Thus traveling together, they came upon the house of a God-fearing man, who treated them well, giving them to eat from a silver platter. When they had eaten, the angel took the platter and threw it into the sea. The monk found this both amazing and unjust, but he remained silent.

The second day they came upon the house of another hospitable man who cordially received and treated them as kinsmen. Before leaving, that man brought out his only son for the travelers to bless. The angel of God then took the child by the throat and strangled him.

The monk was greatly angered and asked the angel who he was, and why he had committed such misdeeds. The angel meekly replied to him: "The first man was pleasing to God in all things and had nothing in his house that was attained by injustice except that silver platter. By God's judgment, I threw that stolen platter away, so that the man would be righteous before God in all things. The other man was pleasing to God and had nothing in his house that would bring down the wrath of God except his son, who - had he matured - would have become a great criminal and a demonic vessel. Therefore, by God's judgment, I strangled that child in time to save his soul, for the sake of his father's goodness, and to save the father from many miseries. Behold, such are the mysteries and the unfathomable judgments of God. And you, elder, should return to your cell and not strive vainly by inquiring into that which is in the authority of the One God."
John at 10:10:00 AM
Share
‹
›
Home
View web version