St. James (Jacob) the Persian (Feast Day - November 27)
James, the glorious Great Martyr of Christ, was from Persia. He lived during the years of the pious Kings Arcadius and Honorius, the sons of Theodosius the Great, who ruled in the year 395 A.D. He lived in Veethiavan of Persia, situated in the land of Elouzeesion. Then, Isdigerdis I and Bahram V, his son, ruled over the Persians. They were cruel and pitiless men. They forced the Christians (whomever they found) to worship, as they did, the senseless idols.

Now James was a lord of merit, notable and of good service to the nation. He was honored and beloved by all, as he was wealthy, knowledgeable and virtuous. Wherefore, he was considered first in the palace, and the king exceedingly loved him. He bestowed on him great importance and abundant gifts. So much did Isdigerdis and his son Bahram love James, that they did not wish to be separated even one hour from him. They displayed such favor, that they had him as a brother, for he was well-mannered and his family prominent. But this was so that they could cunningly lure him to impiety. For James was a Christian from childhood just as were his parents and wife, both pious and faithful to our Lord Jesus Christ. So, these villains tried hard to estrange him with gifts and gratuities. They chose to be good-natured and discreet, and to persuade him with benefits and flatteries, rather than with threats and torments. However, this marvelous James, who resisted at first, was defeated by the many generous favors of the ruler, and, alas!, he was captured. He denied the most sweet Christ and worshipped the demons, and became one in spirit with the king.

But do not frown; hearken and strengthen your heart, and attend to this. Because just as one drop of water drips continually onto the hard marble to perforate it, so also many gifts and favors are able to convert the gratified soul with ease and quickness; thus, did the ever-memorable one have the solid rock of his faith hollowed out. But listen to his end to receive exultation and joy, that God (Who foreknows and foresees) does not overlook but straightens the fallen and illuminates the way of the blind.

It was circulated around the land that James had denied Christ. This news came into the ears of his mother and spouse, who were wounded in their hearts upon hearing these unexpected words. Since they were not present to censure his tongue, they sent him a letter, saying thus:

"It was not proper to your nobility to exchange falsehood for the truth; to defraud the faith for the honor of men and temporary rewards, which pass by as a dream and disperse like smoke; and to love the perishable and temporary kingdom, and abandon immortality and eternity. For this violation you would elect to be cast into the inextinguishable fire and endless torment? You, who are unworthy of His love, denied Christ, in order to gain one worm-eaten man? O the mindlessness! What are you able to benefit by them, when you go together into torment? We have been greatly distressed by you and pour forth many tears and, with all our hearts, we pray to the true God not to desert you, as He is compassionate, but to receive your return. So recognize the mischief that you have created to become a son of darkness, instead of light, which you were formerly. Recover and revert again to godliness. And, if you do not repent speedily, know this: you no longer have any relation with us. But we wish to be as strangers and foreigners to you, and you will inherit nothing from us, so as to be completely separated from our society. Because not one particle has the light with the darkness, and the faithful with the faithless. So make a good return. Whereas, you departed badly; but the Master, Whom you denied, will receive you with open arms and rejoicing. If you disdain our advice and tears, when you reach the divine trial, you will be punished in torments endlessly and your crying will be in vain."

These things James read in the letter, and he remained in a stupor; indeed, as if from sleep and drunkenness, he was roused, realizing the treasure of faith of which he was destitute, and the evil of error into which he had tumbled. He cried bitterly and repented from his heart of the former things and beat his breast, lamenting and crying before the Master to forgive the iniquity, as He is compassionate. In imitation of Manasseh and Peter's repentance, he studied the Holy Scriptures and recalled the bitter punishments. He was not able to cease the tears, and it was evident he repented of his former impiety. Wherefore, certain idolators perceived and learned the reason for his disquiet. They betrayed him to the king. The king's heart was wounded on hearing such things. Infuriated, he summoned him for questioning and inquired if he were a Nazarene. James answered boldly and eagerly:
"Yes, I am a servant of my Lord Jesus Christ."
The king's rage grew, but he remembered their previous friendship, so he did not make a display or an outburst of anger. As in preceding times, he tested him with flatteries and by promising gifts; but at other times, with threats of hideous punishments and torments, to see, perchance, if he would waver. But the coward was not effective, because the saint thirsted for martyrdom.
The blessed James, in order to cause the tyrant to slay him quickly, answered him thus:
"In vain you labor, attempting with feeble means to sow wheat in the guff, or to hold back the winds in a net. In this way, it is not possible any longer to change my belief from piety. So then, lay aside all hope, so as not to conceal your wrath any more. Cut my body into pieces, punish, burn it, do with it as you will, but my soul you will not be able to turn to godlessness."
Again, the king tempted him with flatteries to ensnare him. Hiding his anger, he said to him with feigned love:
"James, pity your body, your blossoming manhood, remember our immeasurable friendship. Be not deprived of any worldly pleasures in this sweet life, in order to receive harsh pains and the bitterest death for these uncertain good hopes. I promise you that you will have wealth and power in my kingdom, greater than before. Yes, my beloved and dearest friend, I entreat you not to have contempt for our great friendship and appear before me ungrateful, because, if you disobey, it is necessary - although I do not want to - that you be taught a lesson. But do not think that I will be lenient later: no, it is not true, but I will change the love that I have for you now, into hatred that is commensurate with your disobedience. And I will deliver you to unheard of, horrible torments."
James boldly replied:
"O king, do not waste time importunely. Do not frighten me with torments, nor insincerely compliment me with tributes and gifts, because I despise from my heart all temporal enjoyments, empty glory, decaying riches and bodily sensuality, in order to inherit the true wealth and the honor, inexpressible delight and bliss. Wherefore, gladly I divest myself of wealth and glory, friends and relatives, mother, wife and all the pleasures of the body. And not only these things, but I am prepared to receive 10,000 deaths, only not to injure my sweet Christ, the Beautiful One among the sons of men, Who fashioned the sun, moon and the remainder of creation, and His divine will is equal to His power. He who denies Him goes to endless death."
This, in addition to other things, uttered the blessed James. And the king went into a furious rage, realizing it was impossible to pervert him. Wherefore, he took counsel with a certain senator, who recommended such severity, that upon hearing it, the king shuddered. That is: to dissever the joints, starting first with the fingers of his hands, and afterwards, the remainder of the joints. O the inhuman decision! What other unsparing tyrant ever revealed such pitilessness towards his friend? O savage judgment and inexorably merciless soul! Whoever heard this felt empathy; not only the faithful, but even those godless idolators among the nations, who wept at such a ferocious verdict. But our true martyr did not shrink back upon hearing such a sentence; rather, he hastened to the stadium with excessive joy and eagerness.
A large portion of the population assembled in order to witness the hideous sight. Not only people, but also the angels and demons were present at this mighty contest and violent duel. The angels were present in order to assist the saint invisibly to receive the crown, and the adversaries to prevent him, if possible, and to frustrate his purpose. Also, the word of the apostle was fulfilled: "...for we are made a spectacle unto the world, and to angels, and to men" (I Cor. 4:9). For even the Great Promoter of contests and Heavenly King was there and stood above him to strengthen him in this match and, in the end, to grant him the imperishable crown. As the admirable and magnanimous man observed the fierce executioners and the forbidding instruments with which they were to cut him into pieces, he did not fear those devices prepared. Every kind soul, seeing another suffering thus, would feel sorrow and pity for him as a man. But he did not show any gloom and never uttered anything foul, nor did he suffer to do anything unworthy of his valor. But, as if his flesh was insensible, he stood with a joyous glance and cheerful face.

Relics
According to St. Nikolai Velimirovich: "His head is to be found in Rome and a part of his relics in Portugal, where he is commemorated on May 22." Portions of his relics are found in many other shrines throughout the world, including the Great Cave Monastery in Kalavryta, Greece as well as the Barlaam Monastery at Meteora. 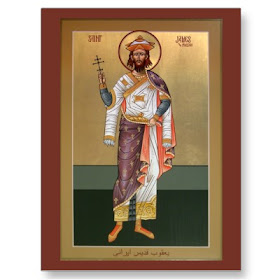 Apolytikion in the First Tone
Be entreated, O Lord, by the sufferings endured for You by the Saints, and we pray You, heal all our pain.
Kontakion in the Second Tone
O stout-hearted James, persuaded by thy noble wife, and fearing the dread tribunal, thou didst scorn all fear of the Persians with their profane decrees, and thou wast shown forth to be a most wondrous martyr of Christ, when all of thy body was pruned like a vine.
John at 10:11:00 AM
Share
‹
›
Home
View web version