The Wall Street Broker Who Became A Monk 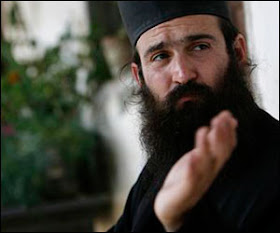 A FORMER Wall Street broker has swapped Manhattan for a monastery in Bulgaria to become an Orthodox monk.

Hristo Mishkov, 32, had a successful career as a broker on the Nasdaq stock exchange in New York until he decided to give it all up to return to his native Bulgaria.

Exchanging tailored suits and expensive shoes for a cassock and sandals, Brother Nikanor, as he is now known, believes Wall Street and the City deserve all they get as the credit crunch bites deeper and the global financial system goes into meltdown.

"It is right to see people who consume more than they deserve shattered by a financial crisis from time to time, to suffer so that they can become more reasonable," he said.

The collapse of banks and investment firms was a necessary correction because they had grown greedy, he said.

Brother Nikanor wakes at dawn to attend to a herd of buffalo in the 12th-century Tsurnogorski monastery, 50 kilometres west of the capital, Sofia. But he has not entirely turned his back on his past. When he became a monk five years ago, he retained one luxury, a mobile phone, and has used it to raise hundreds of thousands of dollars from former colleagues to rebuild the monastery. 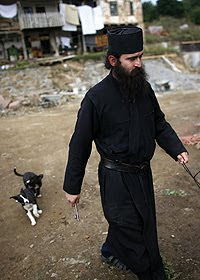 Brother Nikanor, a Nasdaq broker turned monk, advises former colleagues to put a jar with soil on their desks to remind them where we are all heading and what matters in life.

As western banks fold into each other like crumpled tickets and commentators portray the current crisis as the last gasp of modern capitalism, Hristo Mishkov, 32, shares the pain -- and offers home truths.

His story partly resembles that of Brother Ty, the monk-tycoon protagonist of the 1998 satire "God is my Broker" by U.S. writers Christopher Buckley and John Tierney -- he failed on Wall Street and became a monk.

But 10 years later, the similarities are superficial: the Bulgarian had a successful broking career, does not write self-help manuals and aims to get happy, not rich.

His interest in financial markets began under communism in the 1980s when he and other children created their own play stock exchange in their apartment block's basement in Sofia.

Five years ago, after failing to find happiness in the life he lived, the Christian Orthodox who hadn't practiced as a child quit the New York-based market for a dilapidated Bulgarian monastery that once served as a communist labor camp.

Retaining one luxury -- a mobile phone, which connects him with both potential donors and former trading colleagues -- he has brought the rigor of his broking experience to his faith.

He has helped to raise hundreds of thousands of levs (dollars) to rebuild the monastery -- a hard task in a country where charity is not part of the mentality and building shopping malls and golf courses is a priority.

"Many people... in the world do not realize that they have not earned the food they eat, that they take without giving," Mishkov said. "But if someone consumes more than they have earned, it means someone else is starving.

"It is right to see people who consume more than they deserve shattered by a financial crisis from time to time, to suffer so that they can become more reasonable."

Being a trader has seldom been more traumatic: placing bets on political decisions about billion-dollar bank bailouts which, if they fail, could mean much more than a bad day for yourself or colleagues, but also jeopardize livelihoods.

Some have found solace in religion, others in humor, but a few fall. Surveys show traders reporting more stress and every news report of a trader suicide is accompanied by suggestions the pressure may have been too much.

"We always search for happiness in the outside world, in material things, which makes us constantly unsatisfied, angry with ourselves and the world," said Mishkov, who exudes a sense of tranquility, intelligence, and humor.

Greed and the marketization of our lives have reached the point where people have been turned into a commodity -- even their health can be traded like a stock, he said.

"We have so quickly lost our human appearance, we have become beasts ... There's no-one to count on and say 'hey neighbor come help me.' He will come but demand a payment."

His monastery, tucked among hills 50 km (31 miles) west of Sofia, was founded in the 12th century. The communist regime which banned religion turned it into a labor camp, then a children's pioneer camp and a livestock farm.

Now Mishkov works hard every day milking buffalo cows and building stone walls. He says he is not against rich people but can only respect those who contribute to the good of society -- pointing to Microsoft founder Bill Gates as an example.

As a younger man working for more than two years for Karoll, one of Bulgaria's leading brokerages, Mishkov was good at his job, former colleagues say.

"He was a religious person and that annoyed me sometimes," said Alexander Nikolov, head of international capital markets at Karoll. "There were occasions when he would not show up at work because of some religious holiday."

His colleagues were stunned when he decided to become a monk, but Mishkov felt the time had come to look after people's souls.

"Everybody can be a good broker but this does not bring much benefit for the world," he said. Religion can help people cope in today's stressful times and find answers, Mishkov added.

Churches in New York's financial district reported last month increased attendance at lunchtime meetings, with many more people in business attire than usual, when some of the world's biggest investment banks collapsed.

"It is very important to just remind yourself that there is a real world out there. In any job but particularly in financial markets, you need to try and keep your feet on the ground," Bell told Reuters by phone.

Mishkov says the crash should also help correct a dangerous global trend of an excessive outflow of labor to the service sectors, by people attracted by high pay and an easy life.

"Milk is not produced by computers, bread doesn't come from a good company PR. It is necessary to plow, sow and harvest before that," says the monk.