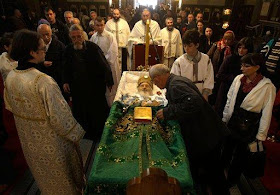 BELGRADE, Serbia (AP) - Hundreds of thousands of people joined a somber funeral procession Thursday for Patriarch Pavle, who led the Serbian Orthodox Church through its post-Communist revival and the Balkans' bloody ethnic wars in the 1990s.

Pavle, a highly popular patriarch known for his modesty and humility, died over the weekend at age 95 after being hospitalized for two years with heart and lung problems. He had led the 7 million-member church since 1990.

The casket was placed on a caisson as crowds joined Serbian leaders and clergy in a procession to the white-marbled St. Sava Temple, the biggest Orthodox Christian church in the Balkans.

Istanbul-based Ecumenical Patriarch Bartholomew I - the spiritual leader of world's Orthodox Christians - led a liturgy in front of the masses gathered outside the church.

Bartholomew described Pavle as a "great spiritual leader" during the turbulent era for the nation.

"His face and appearance were radiant with holiness and righteousness," he said. "He was a true monk, a man of endless prayers, kind and calm but also a fighter who does not back down and is ready for any sacrifice when needed."

Serbia's President Boris Tadic, who attended the prayers, thanked the late patriarch "for having been there for us with his deeds and message that we should always be human and never respond to the evil in the others with the evil within us."

State television estimated that about half a million Orthodox believers, many from neighboring Bosnia and Montenegro, attended the funeral procession through downtown Belgrade as bells tolled from churches.

Pavle is to be buried later Thursday at a monastery in a Belgrade suburb in a private ceremony attended only by church leaders and Serbian officials. 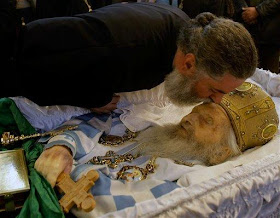 "I come to bid last farewell to the best man who ever lived," said Gojko Ljubovic, 53-year-old teacher from the southern town of Vranje. "He has done so much for the Serbian nation."

The frail-looking Pavle, known here as "the walking saint," had called for peace and conciliation during the Balkan wars. But critics say he had failed to openly condemn the extreme Serb nationalism of former President Slobodan Milosevic, which triggered the clashes with Catholic Croats and Muslims in Bosnia and Kosovo in the 1990s.

There have been reports of an internal struggle over who will succeed Pavle. The election cannot be held until at least 40 days after Pavle's death. The favorite is influential Bishop Amfilohije, a hard-liner known for his anti-Western and ultranationalist stances, who served as the acting head of church during Pavle's hospitalization.

After the liturgy, Amfilohije described Pavle as a "modest and quiet man who is now a beacon of light that shines on us from the sky."

"People have poured like a river only to touch him," Amfilohije said of the large crowds who have come to the Saborna Church to pay their last respects to Pavle since Sunday. 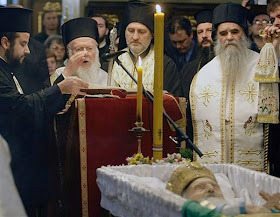