A History of 20th Century Russia, Warts and All 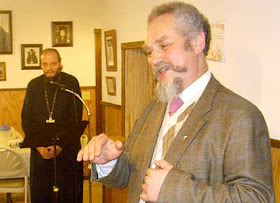 A new two-volume history of Russia’s turbulent 20th century is being hailed inside and outside the country as a landmark contribution to the swirling debate over Russia’s past and national identity.

Written by 45 historians led by Andrei Zubov, a professor at the institute that serves as university to the Russian Foreign Ministry, the weighty history — almost 1,000 pages per volume — was published this year by AST Publishers and is already in its second printing of 10,000 copies.

Retailing at the rough equivalent of $20 a volume and titled “History of Russia. XX Century,” the books try to rise above ideologically charged clashes over Russia’s historical memory. They are critical both of czarist and Communist Russia, and incorporate the history of Russian emigration and the Russian Orthodox Church into the big picture of a chaotic, violent century. While written from a clearly Christian perspective — one author is a Russian Orthodox priest — the history avoids overt nationalism or anti-Semitism.

Eminent historians in the United States and Poland who often take a critical view of Russia’s passionate, partisan discussion of history lauded its balance.

“Nothing like it has ever been published in Russia,” Richard Pipes, the Harvard University Sovietologist, wrote in an e-mail message, noting that he was trying to raise money for a translation and publication in English. “It is a remarkable work: remarkable not only for Russia but also for Western readers. For one, it has gotten away from the nationalism so common in Russian history books, according to which the Russians were always the victims of aggression, never aggressors.”

Mr. Pipes noted that it made extensive use of Western sources — rare in Russia — and praised its attention to often overlooked questions of the role of morals and religious beliefs.

“This is one of the most important books that came to us from Russia in the past 20 years,” said Andrzej Nowak, a historian from Jagiellonian University in Krakow, Poland. In an e-mail message, he praised “the exemplary way” it treated sensitive topics like the Molotov-Ribbentrop Pact; the wartime agreement between Hitler and Stalin; the Soviet invasion of Poland in September 1939; and the mass murder of Polish officers at Katyn.

Perhaps no issue today consumes Russians of all stripes like the debate about what Russia was, is and will be. Much as their president, Dmitri A. Medvedev, urges the need for modernization, Russians are fixated on the past, and on a quest to unite and explain, somehow, the contradictions and violence of czarist and Communist rule.

The latest manifestation of this came this month with the release of “Tsar,” a film by the director Pavel Lungin. In violent detail, it retells the 16th-century story of Ivan the Terrible and his conflict with a pious monk, and it has invited comparison to Stalin and his complicated relations with the Russian Orthodox Church, and with society over all.

An unusual combination of two priests, two journalists, a former government-minister-turned-writer and a reality-television show host recently gathered in central Moscow to hash out opinions about “Tsar.”

Ksenia Sobchak, the celebrity host of a Russian TV version of “Big Brother” and daughter of the mayor of St. Petersburg who oversaw its renaming from Leningrad in 1991, embraced the role of political and religious affairs commentator with a gusto that underscored how the history debate touches many.

Complex dictatorial rulers like Ivan the Terrible, Peter the Great and Stalin have a seductive hold over Russians, Ms. Sobchak said, “because I think authority in our country always strives to deify itself, and generally succeeds.”

By contrast, Professor Zubov used a recent presentation of his work at a Roman Catholic cultural center to emphasize that Russians needed to make up their own minds about history, and not adopt the latest spoon-fed version.

“It’s not necessary to wait for Putin, Medvedev and United Russia to make a decision to vote in the Duma,” he said. “We’re the citizens of this country. We’re its main subject. We’re not an object. We’re the subject.”

The two volumes, with their hard truths, could serve as a “textbook for repentance,” he suggested.

Mr. Zubov added that the book, which he said had been financed by people who preferred not to be named, appeared after two of Russia’s top television executives, Oleg Dobrodeyev and Aleksandr Kulistikov, approached him at the recommendation of Aleksandr Solzhenitsyn, who died in 2008.

“The moment has come to say finally whether we are with the Soviet Union and all of its deeds, or whether we are victims of the Communist regime and, correspondingly, reject its deeds as alien to us,” Mr. Zubov said in an interview in his book-lined Moscow apartment. “This moment has come and we can no longer turn our back on it.”

Georgy Mitrofanov, an Orthodox priest and academic who wrote some sections of the book devoted to the Russian Orthodox Church, said a re-evaluation of history could not solve Russia’s problems. “We are too late,” he said.

Aleksandr Arkhangelsky, a television host and columnist for RIA Novosti, a state news agency, has interviewed Father Mitrofanov and Mr. Zubov on air, and suggested that the intensifying discussions of history bode fresh turbulent times.

“Society is not satisfied,” Mr. Arkhangelsky said at the presentation. “It is looking for an answer to the question: Who were we? in the future, or to the question: Who will we be? in the past. This means that very serious times await us, because in Russia historical mass consciousness becomes acute on the eve of major changes.”