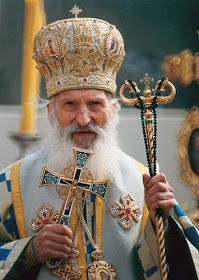 BELGRADE, November 23, 2009 (IPS) - It is not often that anything in Serbia can bring several hundred thousand people together, but that is exactly what happened Thursday when the Patriarch Pavle, head of the Serbian Orthodox Church (SPC), was buried in a monastery graveyard near Belgrade.

The Patriarch, aged 95, died four days earlier, on Nov. 15, after spending two years at the Military Medical Academy of Belgrade in fragile health.

The immediate reaction from top Serbian officials, such as President Boris Tadic and Foreign Minister Vuk Jeremic was that they felt like "a member of our family died." They had regularly "consulted the Patriarch before any major political decision of importance for Serbia."

Four days of official mourning were proclaimed and Serbia stood still until the Patriarch’s funeral. As his body lay in the open casket in the downtown Cathedral Church of St. Michael Archangel, many thousands of mourners came to kiss the hand of "the holy man," as he was known among ordinary people, due to his modest and humble way of life.

All the recent polls say that 95 percent of Serbs declare themselves Orthodox Christians - with the influence of the SPC both on people but also on politics becoming impressive since the 1991 disintegration of former Yugoslavia.

But the death of the Patriarch, with all the expressions of public grief, solemn radio and television programmes - with presenters wearing the traditional black mourning clothes - could not prevent the brewing of controversy. The controversy surrounds the SPC itself and the Patriarch himself, since his coming to "the throne"- as his post is commonly called - in 1990.

"He was ‘a holy man’ due to his humble, simple and modest life," Belgrade University professor and analyst Zarko Korac told IPS. "But the set of events surrounding the SPC and Pavle, rouse controversy on the role of SPC in the wars of the 90s and the constitutionally secular state of Serbia now plunging into the arms of the church - with the accent of the importance of the patriarch and religion in general."

Korac was referring to the behaviour of the SPC during the wars of disintegration of the former Yugoslavia that led to deaths of more than 100,000 people - most of them Bosniak Muslims. The wars were waged between Muslims, Catholic Croats and Orthodox Serbs.

Patriarch Pavle came to "the throne" in 1990, before the wars started. Neither Pavle, nor his church and priests did much to change the direction of aggressive and hard-line nationalism.

The SPC priests blessed the cannons that shelled the Bosnian capital of Sarajevo for three and a half years from 1992 as well as the Kalashnikovs used to kill Muslims around Srebrenica in 1995, according to video taken at the time.

Priests have also played an active role in Serb volunteer units that committed numerous war crimes in Croatia and Bosnia, with the mantra of "defending the Orthodox Serbs from being eradicated by Catholic Croats and Muslims."

The SPC under Pavle has failed to distance itself from the Srebrenica massacre - where 8,000 Muslims were killed - or any other war crimes committed by Serbs who claimed to be devout Orthodox Christians.

"It is now important to see who will come next to "the throne," Korac stressed.

One of the most prominent analysts of religious matters in Serbia, Zivica Tucic, told Belgrade B92 Radio that "the choice of the next patriarch is of major importance for Serbia."

According to the church canons, the next patriarch will be elected in May next year, when the next session of all its archbishops and bishops is due to be held.

In the meantime, Archbishop Amfilohije, a prominent conservative and nationalist clergyman, has already been appointed to temporarily act as the patriarch.

"It is not only the matter of who it will be," Tucic said. "Serbia is at a turning political point - whether to continue its policy towards joining the European Union (EU) or to give up to those conservative circles that prefer the nation to remain turned toward itself."

Serbia is hoping to begin its process of joining the EU by the end of the year. This has been the political ambition of the nation ever since former wartime leader Slobodan Milosevic fell from power in 2000.

The only remaining pre-condition for such a move is the handing over of Ratko Mladic, a Bosnian Serb general accused of the massacre in Srebrenica by the International Criminal Tribunal for former Yugoslavia (ICTY) in The Hague. He has been in hiding since 1995, but top Serbian officials have hinted that he might be arrested by the end of the year.

"We need a patriarch that will be a visionary," Tucic said. "It should also be good that the Patriarch be a Serb from Serbia, who knows the mentality and events in Serbia proper."

He was referring to the fact that the strongest nationalists among the archbishops and bishops are those who came from Bosnia and Croatia into Serbia during the wars of the 90s - fanning nationalism and intolerance towards other ethnic groups from former Yugoslavia.

Although hundreds of thousands of Serbs from those areas have found refuge in Serbia proper since the 90s, the groups deeply differ in mentality and attitudes, which are the sources of frequent tensions between newcomers and Serbs in Serbia proper.

Serbia now has a population of 7.4 million, where more than a million people are non-Serbs - such as ethnic Hungarians in the northern Vojvodina province, Bosniak Muslims in the Sandzak region near Kosovo border, and ethnic Albanians in the Presevo valley in the south.

"We are also witnessing now the effort of state to influence events in the SPC," Belgrade university professor Vladimir Ilic told IPS. "The regime has turned the death of the patriarch and the funeral into the a state and non religious event. The President of Serbia attended the session of the Synod (the SPC government) the other day, which is all without any constitutional basis. This brings into doubt the constitutional regulation that Serbia is a secular country."

Critics of the SPC, stress that the church is too conservative, too turned to traditional values and ways of life that have nothing to do with modern life.

"The church says women belong to homes, they are here to bear children, take care of family, be modest and humble and without any influence whatsoever on the everyday modern life," sociologist Zorica Milenkovic told IPS.

"That is something coming from 17th and not 21st century. Regardless of what the SPC did or did not do in the 90s, it is essential that it now see that many centuries have passed and that life has changed," Milenkovic explained. "It is not mere or insubstantial politics it has to deal with. It is the challenge of modern times that have to be explained to the people in the appropriate way, and that is where the new head of the SPC might have an important role."
John at 2:57:00 AM
Share
‹
›
Home
View web version