Darwinism: The Ideology Behind Marxism and Teenage Nihilism 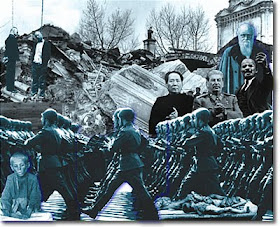 Where Chairman Mao and Teenage Nihilists Got Their Motivation
Nov 12, 2009
Creation - Evolution Headlines
What propelled Mao Zhedong to become the biggest mass murderer in world history? Let a professor of Chinese history answer the question. James Pusey (Bucknell U), writing in Nature this week for a series on “Global Darwin,”[1] was explaining the vacuum left by the collapse of the reform movement in the early 20th century. A “group of intellectuals” found Marxism attractive. It was the fittest ideology:

"Many tried to fill it: Sun, Jiang Jieshi (Chiang Kaishek) and, finally, the small group of intellectuals who, in indignation at the betrayal at Versailles, found in Marxism what seemed to them the fittest faith on Earth to help China to survive.

"This was not, of course, all Darwin’s doing, but Darwin was involved in it all. To believe in Marxism, one had to believe in inexorable forces pushing mankind, or at least the elect, to inevitable progress, through set stages (which could, however, be skipped). One had to believe that history was a violent, hereditary class struggle (almost a ‘racial’ struggle); that the individual must be severely subordinated to the group; that an enlightened group must lead the people for their own good; that the people must not be humane to their enemies; that the forces of history assured victory to those who were right and who struggled.

"Who taught Chinese these things? Marx? Mao? No. Darwin."

The ideology that led Mao to murder 77 million of his own people began with a view of nature that values struggle and fitness over the individual. Though acknowledging that the political currents in China were complex, with reformers like Yan Fu and Sun Yat-sen incorporating Darwinian principles without radical revolution, Pusey placed the worldview that empowered Marxist ideology squarely at the feet of Darwin. Darwin was Mao’s ideological mentor.

Darwinian ideas can produce murderous results in individuals, too. The Sunday Times Online printed an article that described the Darwinian motivations behind some of the serial killers of recent memory. “The naturalist [Darwin] outraged the church, prompting a bitter debate that still sets creationists against evolutionists,” Dennis Sewell wrote. “Now a sinister link has emerged between his work and the recent spate of high-school killings by crazed, nihilistic teenagers.”

Despite Darwin’s personal reputation as an “amiable Victorian gent,” Sewell continued, he “has been fingered as a racist, an apologist for genocide, and the inspiration of a string of psychopathic killers.” The shooters at Columbine High School, for instance, saw themselves as eliminators of the weak. Harris wore “Natural Selection” on his T-shirt the day of the shooting spree. Many other artifacts gathered afterwards, described in the article, uncovered the boys’ fascination with “survival of the fittest.”

In 2007, detectives intercepted a school shooting in Pennsylvania. They “discovered that their suspect often logged on to a social networking site called Natural Selection’s Army,” the article says. Sewell discussed a personality cult around Harris and Klebold in certain chatrooms and websites, including a computer game that lets the player act out the massacre. “Natural Selection” apparel is hot with these aficionados, and “‘Natural Selection’ is the name of a popular computer game in which competing teams attempt to annihilate one another – a sign that Darwin’s term is still associated by many teenagers with sudden and extreme violence.” Another case is the killing spree in 2007 in Finland by Pekka-Eric Auvinen, who declared in his manifesto before the event that he was a social Darwinist wanting to weed out the unfit. In his words: “It’s time to put natural selection and survival of the fittest back on track.”

Sewell acknowledged that Darwin himself would have been horrified by all this. He knows that other great figures have been used by murderers as their inspiration. Still, he was not ready to let the bearded old man off the hook. “One conclusion implicit in evolutionary theory is that human existence has no ultimate purpose or special significance.... Darwin also taught that morality has no essential authority, but is something that itself evolved,” he continued. These simple (and simplistic) ideas are certainly accessible to disturbed adolescents who feel nothing stops them from taking natural law into their own hands. And Darwin himself wrote in 1881, “Looking to the world at no very distant date, what an endless number of the lower races will have been eliminated by the higher civilized races throughout the world.”

Sewell is author of the book The Political Gene: How Darwin’s Ideas Changed Politics. His Times article was published on the Science page, not the Opinion page. On page 2, he continued supporting his premise that Darwin’s views feed into the nihilism behind high school shootings – and political genocides – because it destroys all moral restraint. One particular example shows this is not an isolated interpretation. He said, “Cheerleaders celebrating Darwin’s 200th birthday in colleges across America last February sang ‘Randomness is good enough for me, If there’s no design it means I’m free’ – lines from a song by the band Scientific Gospel.” With a gospel like that, no wonder some go beyond the mere abandonment of sexual mores taught by their parents. “But wackos such as Harris and Auvinen can just as readily interpret it as a licence to kill.” Sewell ended by pointing out that we cannot begin to address the issues when presented only with a “bowdlerized account of Darwin’s work” – i.e., a sanitized version portraying Darwin as a scientific saint. He said, “The more sinister implications of the world-view that has come to be called ‘Darwinism’ — and the interpretation the teenage nihilists put on it – are as much part of the Darwin story as the theory of evolutions [sic].”