Homily Two on the Holy Protection of the Most Holy Theotokos (St. Luke of Simferopol) 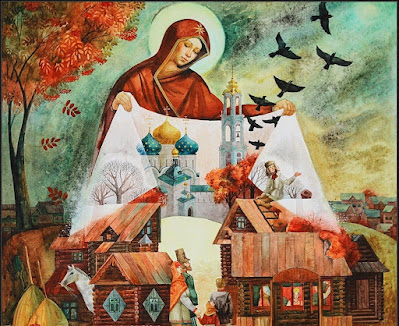 By St. Luke, Archbishop of Simferopol

(Delivered on October 1/14, 1954)
Do not think that I will speak only about the great feast of the Protection of the Most Holy Theotokos: I will not explain the meaning of this feast, for I have already explained it more than once.

Why then, why on the day of the Protection will I speak of the little flock? This is why: I know that most of you are very alarmed by the sudden increase in anti-religious propaganda, and you mourn ... Do not worry, do not worry! It's none of your business.

Please tell me, do you remember the words of Christ from the Gospel of Luke: "Fear not, little flock, for your Father has been pleased to give you the Kingdom."

Atheism began to spread in all countries, and first of all in France, later, much later, already at the end of the 18th century. But everywhere and everywhere, despite the success of the propaganda of atheism, a small flock of Christ has survived, and it is preserved to this day.

You, you, all of you listening to me are a little flock! And know and believe that the little flock of Christ is invincible; nothing can be done with it, it is not afraid of anything, because it knows and always sacredly keeps the great words of Christ: “I will build My Church, and the gates of hell will not prevail against it.”

So, if even the gates of hell do not overcome His Church, His little flock, then why should we be embarrassed, why worry, why grieve?! No need, no need! The small flock of Christ, the true flock of Christ, is invulnerable to any kind of propaganda. The faith of the little flock, their love for the Lord Jesus Christ is so strong that even the gates of hell will not crush this faith.

So why be afraid if we are friends and even brothers of Christ, as He said about His apostles, if we read from the great evangelist John the Theologian such joyful words for us: “He came to His own, and His own did not receive Him. And to those who received Him, to those who believe in His name He gave the power to become children of God.”

And for the children of God, is any propaganda really terrible, is it really possible to renounce the faith?!

No no! Not at all possible.

On the day of this great feast, our Most Holy Lady Theotokos appeared with a multitude of angels and saints, not in broad daylight, not in a crowded assembly of the people, but at four o'clock in the morning in the Blachernae Church of Constantinople, and with her omophorion, shining like lightning, she covered the small flock of Christ kneeling in prayer.

Now, it's all about being genuine members of the little flock of Christ. And if you are them, no propaganda will touch you, will not hurt you - you will be invulnerable.

It will touch only those who have not previously been in the sheepfold, in the Church of Christ, and will have great success among them.

Who belongs to the little flock of Christ? Those to whom the words of the Lord and our God Jesus Christ refer: “Whoever has My commandments and keeps them, he loves Me, and whoever loves Me, he will be loved by My Father, and I will love him and appear to him Myself.”

You see, in order to be a sheep in the flock, to belong to the little flock of Christ, you only need to love our Lord Jesus Christ with all your heart, you need to write His holy commandments on your hearts and keep and fulfill them with all your heart. That's when we will be - all of us, all of you who listen to me - when you will be in the small flock of Christ, only then we are not afraid of anything, we do not have to worry about anything.