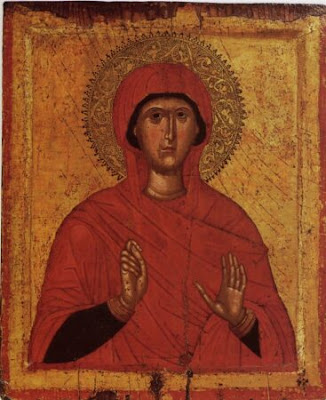 By Paraskevas Lambropoulos
The First Miracle of Saint Marina
My parents went to work in the vineyard one day. When they were coming back they told me that they would load the wood on the animal they had with them.

My mother sat down somewhere and waited for my father to load the donkey. When my father finished, she went to stand up and couldn't move.

She became stiff as she sat.

My father was trying to help her, but nothing was happening. Finally, he put her on the donkey and took her home.

For two months they turned her left and right with the blanket. One day an old woman, grandma Pinio, went to the house to see her.

This old woman told my father to bring the box, i.e. the relics of Saint Marina, which were in some village in the area.

Indeed, they sent a young man to fetch it and returned with the priest, Papa-Antonis.

When they entered the house, some villagers were also there.

As soon as the priest started chanting, O the miracle, my mother slowly began to stretch her arms and legs and soon stood up.

Regarding this incident, there are still people in the village who can confirm it.

The Second Miracle of Saint Marina

After some time passed, my father fell ill. He suffered paralysis of the nerves and was bedridden for six months.

All the villagers visited him to comfort him, each in their own way.

"Panagi, why don't you send someone to bring the box of Saint Marina?" she tells him.

And my father grabbed the lifeline and his hopes and faith turned to Saint Marina.

And the miracle happened again. He felt a numbness and tightness that started from his head and reached his feet and at that exact moment he got well. They did not have to bring the holy relic of our beloved Saint.

She herself came and healed him, because my father believed with all his strength that her Grace, which can heal souls and bodies and cleanse people from unclean spirits, can also heal him.

I humbly believe that we should all ask for her help, even if we think we don't need it.

We can still pray to her for the healing and salvation of others.

If we observe her icon, we will see a young lady, very sweet, but she has a lot of boldness towards God.