The Prophetic Schools in Ancient Israel 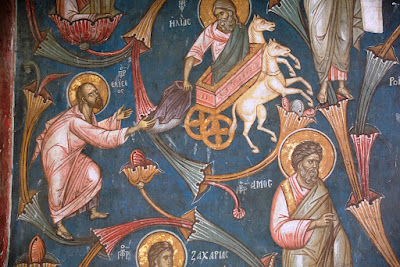 By St. Justin Popovich
The "sons of the prophets" (2 King 2:15) is what the disciples of the prophets were called among the Israelites. They formed communities that were educated under the direct influence of the prophet. The prophetic disciples engaged in prayer, instructive conversations, devotional singing and music, and sometimes received divine inspiration. "Prophesy" according to Holy Scripture does not always mean "foretelling the future" according to the revelation of God; it sometimes means: under the influence of the Spirit of God, to give inspired sermons, to speak instructive sermons, to interpret the word of God (cf. 1 Cor. 14:3-6), to compose prayers and songs to God, to recite them and sing them to the sounds of music. - All this was the goal and task of prophetic communities, prophetic schools. There were such schools in Ramah, Bethel, Jericho, Galgal and other places.
From Lives of the Saints for July (July 20th).
John at 12:40:00 PM
Share
‹
›
Home
View web version