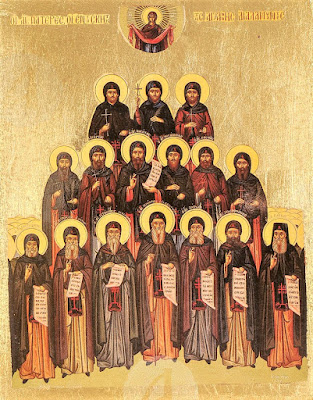 The Synaxis of the Saints who lived gloriously in asceticism at the lavra skete of the holy grandmother of the Lord, Saint Anna, is based on the Divine Office that accompanies the Encomium to them, and is celebrated on the Third Sunday of Matthew, i.e. the Sunday after the Synaxis of All Saints of Mount Athos. The reason why this particular day was chosen for this celebration should be - apart from the fact that this day has also been chosen by other holy institutions for the common celebration of their local Saints - considered an extension of the commemoration of the Synaxis of All Saints of Mount Athos held the previous Sunday.

The author of both the Divine Office and Encomium was written by the monk Iakovos of New Skete, who reposed in 1869.

The Encomium has a lengthy Prologue and concludes with an Epilogue, and in between begins by praising the Venerable Fathers Gerontios, Dionysios, Metrophanes and Sophronios, then in the second section turns to the Venerable New Martyrs Makarios, Nikodemos, Kosmas, Luke, Hilarion, Niketas, David and Nektarios.

At the beginning of the Encomium, in the form of a preface, the author speaks of the life and actions of the Saints, within God's pre-eternal plan for the salvation of "fallen" man so that he may ascend "to the degree from which he fell." It justifies the praise of the Saints and their honor "in annual rites... and in hymns of praise", since according to Saint Gregory the Theologian "praise to the saints, and the honor given to them, is the wages of virtue." In addition, the expression of honor to the "high state of the venerable Fathers" exhorts the faithful "to spiritual salvation" and "relieves the burden of conscience."

The author interprets the reasons why it was deemed necessary to establish the joint celebration of the Saints of the Skete of Saint Anna, as, apart from the well-known Saints, "most of them are completely unknown with their names and deeds and achievements" due to "the vagaries of time, and of the various anomalies and raids."

Then he begins the "narration of each one in chronological order, from the most ancient to the most recent one, how, and in what place and by what martyrdom they ended." He concludes by exhorting his listeners to imitate the venerable Fathers who struggled in the same place they are struggling, in repentance and perfect love for the Lord from the heart.

The Divine Office and Encomium was published with certain additions in the year 1929 by the monk Haralambos and the hieromonk Constantios and his brotherhood, from the Hermitage of the Dormition of the Theotokos, as well as the monk Dionysios Agiannanitis.
John at 12:35:00 PM
Share
‹
›
Home
View web version