Saint Paraskevi and the Blasphemer 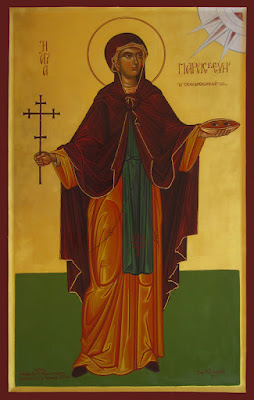 Michael, a resident of Smyrna before the Population Exchange of 1922, one day went to plow his field with oxen. In a moment the plowshare* got stuck somewhere, the oxen did not advance and he himself could not get the plowshare out of the ground. After he was tired and indignant, he began to blaspheme Christ and the Saints.

He immediately lost his sight for about a quarter of an hour. Then, repentant and compunctionate, he begged Saint Paraskevi to give him his sight and promised never to blaspheme again. He also made a vow. As long as he lived, on Friday he would not eat or drink anything. And immediately, miraculously, his sight came back, he easily took out the plowshare and continued plowing, thanking God and Saint Paraskevi.

After the Exchange, Michael came to Greece and settled in Patras. He kept his promise. Every Friday he did not eat or drink anything not even water until the end of his life. Even on Christmas, when it was Friday, he did not eat. But at the insistence of his family to eat, he made a concession only on this day and ate something for the rest of the day in order to stop the pressures of his family.

* The iron edge of the plow in a triangular shape that enters the soil and excavates it.