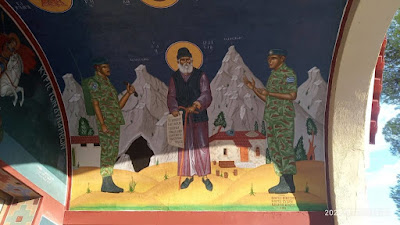 The Signals Corps of the Greek and Cypriot Armies honor Saint Paisios the Athonite as their patron saint.

By decision of the Ministries of Defense of the two countries, July 12th was established as a day of celebration of the Signals Corps, since he himself had served his military service during the civil war as a signal officer.

He is honored at the Signal School of Haidari near Athens, where there is a chapel with a frescoe that depicts Saint Paisios in the middle of two signal officers.
John at 10:36:00 AM
Share
‹
›
Home
View web version