Homily on the Sunday of the Holy Fathers of the Fourth Ecumenical Synod - The Apostles and Fathers as Lights of the World (Metr. Hierotheos of Nafpaktos) 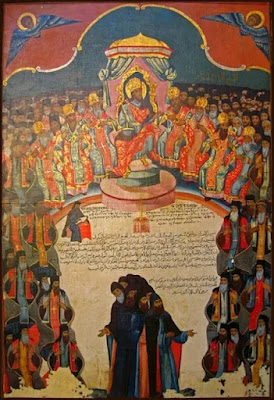 The Apostles and Fathers as Lights of the World

By Metropolitan Hierotheos of Nafpaktos and Agiou Vlasiou
The Holy Fathers of the Fourth Ecumenical Council are celebratied today, who established and confirmed the doctrine that the two natures of Christ, divine and human, which are united "unconfusedly, unchangeably, indivisible, inseparably" in His existence, and this is of great importance for the Church and Christians.

First of all, the Fathers of the Church, establishing this doctrine, did not do it to philosophize or to think or to develop philosophy, but to respond to the thought of the heretical theologians of their time, who did indeed philosophize. The Fathers theologized in a different way than the philosophical theologians.

The Fathers of the Church were successors of the Prophets and Apostles and had an empirical theology. That is, empirical theology preceded and dogmatic confession followed. Thus, they were, according to the apt observation of Saint Gregory Palamas, "sufferers, not intellectuals, of the divine", that is, they participated in the divine Grace and did not reflect on it.

When Christ says that He is the Light of the world, He does not mean the moral, physical or symbolic light, but the real light. The three disciples who were present on Mount Tabor, when they saw the radiance, the Light of the Godhead, emanating from the Body of Christ, and His face shining like the sun, and His clothes being white like the light, then they understood this great truth. The Apostles saw the Light of God, they partook of this Light, therefore they too are the light of the world, as reflections of the Light.

The Holy Fathers also saw this theoptic experience. That is why when the heretics appeared, such as the Monophysites, who taught that, after the union of the two natures, the human nature was absorbed by the divine nature, then the Holy Fathers reacted. The experience of the Apostles certified that the two natures of Christ are united "unconfusedly, unchangeably, indivisible, inseparably", that is, in Christ there is no confusion between the two natures, nor do they undergo any alteration or change, nor are they divided or separated. These formulations of the Holy Fathers were not the result of philosophical reflection, but the fruit of experience. Whoever sees the sun rise every morning and set in the evening cannot make any confusion between sunrise and sunset, because he knows it empirically. Also, whoever sees an iron in the fire burning, knows that the light is from the fire, while the burning object remains iron, without being assimilated.

This means that the Fathers are empirical theologians and not philosophers, they are the light of the world and not scientists, and this is how they theologized. Therefore, we must rely on them on theological issues and in general matters related to faith.