Homily for the Seventh Sunday of Matthew - The Gospel of the Kingdom (Metr. Hierotheos of Nafpaktos) 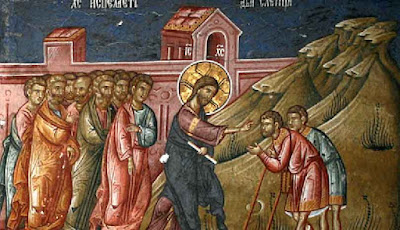 Homily for the Seventh Sunday of Matthew

The Gospel of the Kingdom

Metropolitan Hierotheos of Nafpaktos and Agiou Vlasiou
In today's Gospel reading, we heard about the miracle that Christ performed on the two blind men, who followed Him crying: "Have mercy on us, Son of David" and were found worthy to see the light of the sun and all of creation. Previously, they were blind and in darkness. However, when Christ opened their eyes, they began to see God's creation for the first time. Also, the Gospel told us that Christ healed a demon possessed deaf man, who then heard and spoke. Light and sound are two important factors which are connected with creation, but also with two basic senses that God gave to man to see and hear, that is, the sense of sight and the sense of hearing.

At the end of the Gospel reading, it is written by the Evangelist Matthew that Christ toured all the cities teaching in the synagogue and preaching "the gospel of the Kingdom" and healing every disease and weakness among the people. This gospel of the Kingdom was the content of the preaching of the Apostles, after Pentecost. After His Resurrection, Christ said to the Apostles: "Go into all the world and preach the gospel to all creation" (Mark 16:15). Reading the Acts of the Apostles and their Epistles, one will find that this was the content and purpose of the apostolic preaching, that is, they were talking about the gospel of the Kingdom of God. "Gospel" means good news, good message, and this good news is that this Kingdom has come. What does this mean?

This is related to the miracle we heard today. The miracle of the healing of the blind to see the light of the sun, and of the deaf to hear sound and to speak, has a reference to the other miracle of gaining eyes to see the Light of God and gaining ears to hear the voice of God.

There is a difference between God and man. God is uncreated, meaning He has no beginning and end, while man is created, he was created by God. When God appears to people He appears as Light, God is Light, but He is different from the light of the sun. The Prophets, the Apostles and the Saints saw Christ in the Light. However, when they wanted to speak about God who is in the Light, they also used the concept of the created sun or the image of the glory of an earthly king.

The earthly king, the emperor, presented himself to the people with magnificence, with honors, he wore shining clothes, he was surrounded by soldiers, he lived in bright palaces. When he had dinner everything was illuminated, brilliant. His son's wedding was the biggest event in the empire. Therefore, both Christ and those who saw Christ in the Light used images from the king's life to show the uncreated glory of God. Thus Christ spoke of the Kingdom of God as if it was a magnificent dinner, the wedding of the King's son.

The Gospel, therefore, of the Kingdom are the words about the glory of God, His heavenly Light, and an exhortation to people to acquire a relationship with this Light, to be intoxicated by the divine Light, to see this Light and the glory of God. Thus, Christ taught us to beseech God saying: "Thy Kingdom come", in other words, that this Light may come within us and in our society. A condition for this Light to come is repentance, and for this reason Christ, Saint John the Forerunner and the Apostles exhorted people: "Repent, the kingdom of God is at hand", and the result of the coming of the Light is that the devil and his energies are banished.

This is the content of the church sermon, which is why it is called a "prophetic" sermon. The Orthodox sermon is a manifestation of the glory of God, and an exhortation to share in this glory, to participate in this glory of God. Unfortunately, today the preaching of many of us refers to moral and social issues, it is socialized and politicized, so that it will be modern.

Therefore, people today, who have spiritual blindness and deafness and they cannot see God and hear His voice, they need to be healed so that they can see the glory of God. When a Church does not meet this purpose, it is secularized and loses its mission.