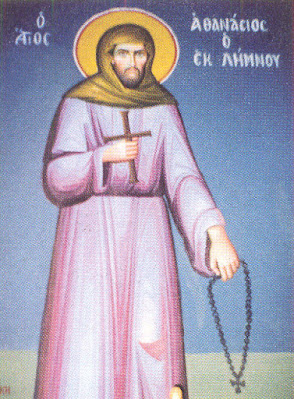 He was from the village of Repanidi on the island Lemnos and after receiving an education he went to become a monk on Mount Athos, at the Great Lavra Monastery.

During the Greek Revolution of 1821 he was captured and sent to Egypt. There they sold him as a slave to a Hagarene lord, who converted him to Islam, circumcised him, and married him to a Christian captive woman. He became a wealthy aga and lived a secluded life with his wife on a large property.

However, three times he saw Saint Athanasios the Great in a vision, as a result of which his spiritual eyes were opened. So he apologized to his wife, left her a portion of his wealth and property, and Athanasios returned to Mount Athos, where he confessed and purified himself with much extreme asceticism and much humility. During this time he stayed in the Cell of Saint Anthony in Karyes, known today as the Skete of Saint Andrew.

Then, after being chrismated, he went to his hometown of Lemnos and lived a pious and God-pleasing life. While there, he is noted to have donated some of his wealth towards the establishment of schools for the education of the Greeks, as well as gave money for the establishment of churches, and the Greeks in turn looked upon him as a leader. The Turks, however, when they discovered that Athanasios had apostatized from Islam, after a trial, put him in a ship to be tried in Constantinople, but when they arrived off the Hellespont, they threw him into the sea while he was bound in chains and drowned him. Thus he received the crown of martyrdom in the year 1846.

His life has been preserved in an anonymous manuscript at the Monastery of Saint Panteleimon on Mount Athos. Professor Apostolos Glavinas of the Theological School of the University of Thessaloniki is credited with discovering this manuscript. In Lemnos he is locally commemorated on the Second Saturday of July with the Synaxis of All Saints of Lemnos.
John at 3:34:00 PM
Share
‹
›
Home
View web version