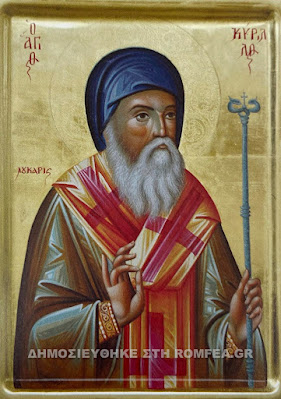 When Cyril Loukaris became Patriarch of Constantinople, Jesuit and Protestant propaganda with its theological innovations was strong and penetrated the Orthodox Church of Constantinople. To counter this influence, he knew how greatly a printing press was needed in which Orthodox writings could be presented in the vernacular, since it was this tactic that was being used by the Jesuits and Protestants. He talks about western propaganda tactics in a letter to Michael, the ruler of Moscow:

"The Papists and the Protestants have printing presses and print all forms of theological books of the Holy Fathers, but in these books they insert their impious heresies, twisting the Holy and God-bearing Fathers, writing things that are in agreement with what they say; but that is not enough for them to achieve their ends, for in the monasteries of Athos and other places, there are old books in manuscripts, which prove their cunning. By printing and composing these books in accordance with their habits and thoughts, they compete in countries where these old books are absent; thus surrounding them with their weapons they appear to be mighty, casting upon us our own arrows."

The first Greek printing press was thus established in Constantinople by Patriarch Cyril Loukaris in 1627 to counter the propaganda of the Jesuits and Protestants. He employed the scholarly monk Nikodemos Metaxas from Kefallonia to operate the printing press. The first book that was published in Greek was called An Exposition of the Orthodox Faith. For this action, Monk Nikodemos was slandered by the Jesuits to the Ottoman authorities, accusing him of being a disguised soldier, and that the printing press was set up to disguise the fact that he was manufacturing weapons and counterfeit money, as well as printing revolutionary pamphlets and anti-Islamic literature. Thus, on January 6, 1628, as the Patriarch was sanctifying the waters on the feast of Theophany, 150 Ottoman Janissaries led by Jesuits destroyed the printing press.

It wasn't until the following day that the accusations were examined, and the slander was revealed, for which the Sublime Porte had the Jesuits who instigated the slander exiled. This exile was also demanded by the Embassies of England, The Netherlands, Sweden and Venice, but the effort of the Patriarch, in which there were many hopes, was thwarted.
John at 4:42:00 PM
Share
‹
›
Home
View web version