Homily Two for the Feast of Pentecost (St. Luke of Simferopol) 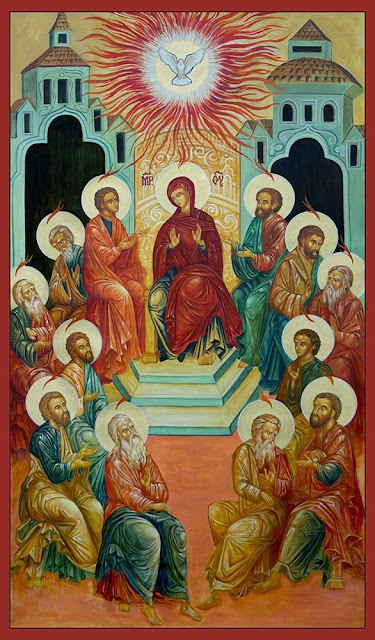 (Delivered in 1958)
The deeply important and mysterious dogma of the Trinity in the Persons of the One God distinguishes our Christian religion from all other religions.

For thousands of years the God-chosen Jewish people lived by faith in the One God, who revealed His omnipotence and incomprehensible wisdom in the creation of the universe; His truth in the global flood, His mercy and love for His people in the miraculous liberation of the Jewish people from the long Egyptian captivity, in the passage through the Red Sea, in conversations on Mount Sinai with the great prophet Moses and in the giving of His ten commandments through Him, and in many, many other great events, about which the Apostle Paul speaks with great power in his epistle to the Romans: “... because what may be known of God is manifest in them, for God has shown it to them. For since the creation of the world His invisible attributes are clearly seen, being understood by the things that are made, even His eternal power and Godhead, so that they are without excuse ...” (Rom. 1:19-20).

The God-chosen Jewish people lived with such faith in the One Jehovah for many hundreds of years, knowing nothing about His Trinity in Persons, and only when the Pre-eternal Son of God, the Second Person of the Holy Trinity, was incarnated from the Blessed Virgin Mary, preached the gospel, crucified on the cross and on the third day He rose again, and after 40 days He ascended from earth to heaven - then only those who believed in Him with all their hearts knew that He was the Consubstantial Son born of the Father before the existence of the world.

About the Most Holy Spirit, the Third Person of the Most Holy Trinity, almost nothing was known in the Old Testament. Only the great righteous ones, like Noah, Abraham, Isaac, Jacob, like the Psalmist David, felt the breath of the Holy Spirit in their hearts. And the great prophets received from Him the deep mysteries of their prophecies and lived in close fellowship with Him.

But on the great day of Pentecost, for the first time, the Holy Spirit revealed Himself to the world in a tangible and obvious way, descending from heaven on the heads of the Apostles of Christ in the form of fiery tongues with a powerful noise, as it were, of a rushing stormy wind.

These fiery tongues burned in their souls and hearts everything impure, every cowardice and fear, completely making them reborn. The Holy Spirit reminded them of everything that they had ever heard from the Lord Jesus Christ, and gave them wisdom unheard of in the world and a wonderful gift to speak in the languages of all peoples to whom they would preach the gospel.

He gave them a miraculous knowledge of the entire Holy Scripture. He gave them great powers to overthrow the pagan superstition. And He placed the beloved Apostle of Christ John immeasurably higher than the theologians of the whole world, and he wrote the Fourth Gospel, which astonishes us with its depth.

It has never been repeated with such clarity.

That is why we also call the day of the descent of the Holy Spirit upon the Apostles of Christ the feast of the Holy Trinity.

Let me also remind you of the extraordinary words of the Apostle Paul in the First Epistle to the Corinthians, amazing and extremely important words for us: “Do you not know that you are the temple of God, and that the Spirit of God dwells in you?” (1 Corinthians 3:16).

Oh, what are you saying, great Paul?! Does the Holy Spirit descend into our hearts too?!

Oh yes! The words of Paul are deeply true, and they are confirmed with great power by the beloved Apostle of Christ John in his first universal epistle, in which we find deeply comforting words for us about what grace-filled changes in our hearts are accompanied by a quiet and imperceptible descent of the Holy Spirit into them (1 Jn. 2:3–4).

This affects the slow but steady liberation of us from all filth of the flesh and spirit. We become humble and meek, quiet and silent, merciful and truthful, loving our neighbors.

May this quiet fellowship with the Holy Spirit be for all of you, my spiritual children, the goal of your life, may it be a deep and quiet joy.

Be worthy of the great joy of being the temples of God and the abode of the Holy Spirit, and He will protect you from all the evils and temptations of the world, and give you eternal joy and eternal peace. Amen.