Homily One on the Holy Foremost Apostles Peter and Paul (St. Luke of Simferopol) 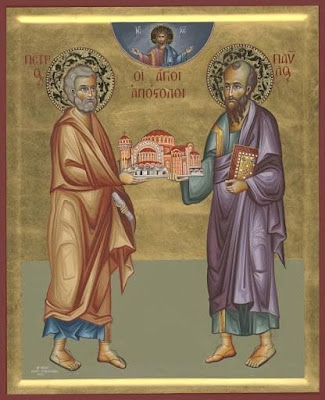 (Delivered on June 29/July 12, 1952)
The Holy Church honors the memory of the holy foremost apostles Peter and Paul as highly as any other of the holy apostles, although they are all great before God.

What does this mean? This means that God Himself placed them above the other apostles. The Lord Himself glorified the Holy Apostle Peter so much as no other apostle, for you heard in the current Gospel reading that our Lord Jesus Christ once asked His disciples who His people thought He was. And the disciples answered Him: “Some call you John the Baptist, others Elijah, and others Jeremiah or one of the prophets” (Matt. 16:14). “And who do you think I am?” our Lord Jesus Christ asked. And then the Apostle Peter answered Him on behalf of everyone: “You are the Christ, the Son of the Living God!” Then Jesus answered and said to him: “Blessed are you, Simon, son of Jonas, because it was not flesh and blood that revealed this to you, but My Father who is in heaven.” God Himself revealed to him that the Lord Jesus is the Christ, the Son of God.

“And I say to you: you are Peter, and on this rock I will build My Church, and the gates of hades will not prevail against it” (Matt. 16:18).

He was previously called Simon, and now the Lord gives him the name Peter, which in Greek means "rock" or "stone". The Lord Jesus Christ Himself called him a rock, a hard stone.

You see, the Lord called the Apostle Peter the cornerstone of His Church, called him that unshakable rock on which His Church will be built. Don't these words have the highest meaning? Is this not the exaltation of Saint Peter over all the other apostles? "And I will give you the keys of the kingdom of heaven." Was not the greatest appointment received by the Apostle Peter from the Lord Jesus Christ Himself?! He was given the keys of the Kingdom of Heaven; he was given the power to bind and loose all of us, the accursed and sinners: he will let us in or not let us in at the gates of the Kingdom of Heaven. You see that the Lord Jesus Himself placed Peter above all other apostles.

On another occasion, He said to Peter: “Behold, Satan asked to sow you like wheat” (Luke 22:31). You know how they sow on a sieve, how they sift out all the impure from the clean grains, shaking them on the sieve.

So Satan asked permission to subject the apostles to severe trials. And then what does the Lord say? “But I prayed for you, so that your faith will not fail; and you, having once turned, strengthen your brothers."

He considered Peter the strongest, the mightiest in faith and devotion to God, and instructed him to confirm all his brothers - the other apostles - if this temptation befalls them, if Satan tries to sow them all like wheat.

So, you see, the Lord Jesus Christ Himself made Peter the foremost apostle.

And why is the holy Apostle Paul also called this? He was not one of the twelve chosen ones of Christ, he was not even His disciple during His lifetime, and now, according to his dignity, according to his greatness, he is counted among the holy foremost apostle Peter. Did not the Lord Jesus have a beloved disciple, John, who at the Secret Supper reclined on His chest? Didn't He take him along with Peter and James to Mount Tabor? Didn't You take these three apostles with You when You prayed in the Garden of Gethsemane until You were sweating blood?

What was the holy Apostle John the Theologian and how did he differ from the holy foremost apostle Peter? Peter was an ardent fighter for the Christian faith, he was an ardent disciple of the Lord Jesus, for you know that when the soldiers and servants of the high priests came to the Garden of Gethsemane to arrest the Lord Jesus, then the apostle Peter took out his sword and cut off the ear of the servant of the High Priest named Malchus.

The disciples of Jesus had two swords: one of them was with Peter, and he was not afraid to draw his sword against the whole detachment, draw his sword and strike Malchus. He was fiery, extremely active, capable of great things.

Was the apostle John like that? No, not like that. He was great, no less great than the holy Apostle Peter, but his soul was more sensitive, he was all living love. His universal message breathes precisely with this holy love.

He had a tender heart, passionately loving Christ, but he was not inclined to fight, he was not as active as the apostle Peter. This is probably why Christ did not give him primacy over the apostles.

And who called the Apostle Paul the second of the foremost along with Peter? This was not done by the Lord Jesus Christ, for he was not His disciple during his lifetime, and not only was not a disciple, but was His cruel enemy, he was a disciple of the Pharisee, the famous teacher of that time Gamaliel.

He studied the whole law under his guidance and was an ardent adherent of the law of Moses, and therefore hated Christ, for, in his opinion, Christ destroyed this law.

When the first martyr Stephen was being killed, Paul guarded the clothes of those who killed and approved of the murder of Stephen. He asked the Sanhedrin for a charter that allowed him to seek out Christians anywhere and everywhere, arrest, bind, imprison and kill them. And so, having received this letter, he went with his companions to Damascus in order to perpetrate bloody reprisals against Christians there. And suddenly, on the way, a light from heaven shone on him, a light that never happens on earth.

In fear and trembling, Saul fell to the ground and heard the words of Jesus: “Saul, Saul! Why are you persecuting me? I am Jesus whom you persecute; it's hard for you to kick against the goads."

He asked with trepidation, “Lord, what will you command me to do?”

Even this one so wonderful calling would be enough for us to exalt the holy apostle Paul. He was called the foremost, and placed along with the Apostle Peter by the Holy Church .

But what guided her in doing so, was it her own arbitrariness? Of course not. She was guided by the Holy Scriptures - the messages of the Apostle Paul himself, which are so holy, so saturated with Divine grace, so deep in content that they call him the second founder of Christianity after the Lord Jesus Christ.

On what basis exactly did the holy Church compare him in dignity with the Apostle Peter? In the First Epistle to the Corinthians, he says about himself: “I am the least of the apostles, and I am not worthy to be called an apostle, because I persecuted the Church of God. But by the grace of God, I am what I am; and His grace in me was not in vain, but I labored more than all of them." And he humbly adds: “Not I, however, but the grace of God that is with me” (1 Corinthians 15:9-10).

We know from the Acts of the Apostles that with bare feet, on foot, Saint Paul walked around all regions of Asia Minor, preaching about Christ everywhere and anywhere, founding churches everywhere, in Macedonia and Greece, in Athens and Rome, even reaching Spain.

So, his labors were immeasurable, were incalculable.

What does it mean, however, that the Lord Jesus Christ chose Peter as His foremost apostle, who rejected Him three times in the court of the high priest Caiaphas? This means that the Lord is the Knower of Hearts: He knew with what immeasurable repentance, with what bloody tears, until the end of his life, he would make amends for his threefold renunciation, he knew that he would suddenly jump out of bed every night when the rooster crows, he would spread himself on the ground, and he would beg God for forgiveness for hours.

For such repentance, the Lord forgave his grave sin, for you heard yesterday at the vigil the conversation of the Lord Jesus with Peter, in which He called him to feed His sheep, His lambs, three times He called for this, and with this three-time call cleansed Saint Peter from the sin of renunciation.

And Saint Paul, who was at first His enemy, was forgiven by the Lord Jesus for the grave sin of persecution against Him and against Christians, because the Lord the Knower of Hearts knew that Saint Paul will atone for his sin by his long-suffering life and his fiery message. He knew what Paul would be, knew that Paul would say, "It is no longer I who live, but Christ lives in me."

The Lord, the Knower of Hearts, knows the hearts of all people. He knew the heart of the holy Hieromartyr Cyprian, Bishop of Carthage, who in his youth was a pagan and led, like all pagans, a sinful, depraved way of life. The Lord forgave him the sins of his youth, forgave him and made him a great saint, and then called him to martyrdom.

And I will remind you of another great saint: he was one of the fathers of the Church, who had a deep philosophical mind - Blessed Augustine, Bishop of Hippo. According to his conversion for a long time he belonged to the Manichean sect. Nevertheless, the Lord forgave him this heresy and placed him on the lampstand of His Church, as a star of the first magnitude.

And how many, how many other similar examples. How many terrible thieves can be named who killed hundreds of people and then through heavy repentance not only earned God's forgiveness, but also became miracle workers.

And we, not knowing human hearts, how often we heavily condemn and stigmatize with contempt and condemnation obvious sinners who, perhaps, tearfully repented before God and were forgiven by Him.

How often do we forget the words of Christ: "Judge not, lest you be judged" (Matthew 7:1). How often we forget about our secret sins, which Christ the Judge will reveal to our shame at the Last Judgment before all people.

May the holy foremost apostles Peter and Paul be constant reminders to us that Christ is God the Knower of Hearts, and knows not only what is in our hearts, but also what can be and will be in them. Amen.