Homily on the Second Sunday After Pentecost - On Ambition (St. Luke of Simferopol) 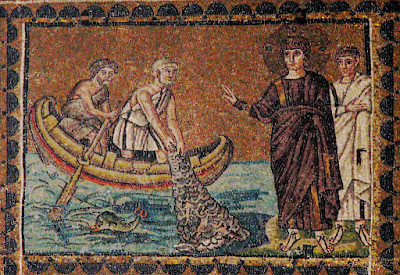 (Delivered in 1958)
About one of our severe spiritual ulcers - about ambition - I now intend to tell you.

In the Evangelist Luke we read something amazing about what happened at the Secret Supper, when our Lord Jesus Christ told the apostles that one of them would betray Him. Of course, this terrible news shocked the apostles, and they asked each other who could do this. But immediately, not finding an answer, they began to argue with each other about which of them should be considered greater.

How could this ambitious dispute arise among them, who had just heard the terrible prophecy of their Teacher about His betrayal by one of them and about His coming sufferings and death on the Cross?

We can only say one thing: the power of ambition over the hearts of even the disciples of Christ was gratifying and enormous.

In the Evangelist Matthew we also read something similar and just as incomprehensible.

The Lord Jesus Christ went with His disciples to Jerusalem and, approaching it, said to them: “Behold, we are going up to Jerusalem, and the Son of Man will be delivered up to the chief priests and scribes, and they will condemn Him to death; and they will hand Him over to the Gentiles to be mocked and beaten and crucified; and on the third day He will rise again” (Matt. 20:18-19).

And again, something incomprehensible to us: having just heard this terrible prophecy, the mother of the apostles James and John, the sons of Zebedee, especially beloved by the Savior, approached Him and asked Him to let them sit with Him one on the right, the other on the left side in the Kingdom of Heaven.

Again we see a flash of ambition in the hearts of the apostles at such a terrible moment.

Can we then say that holy people are free from the passion of ambition, which is so characteristic of most of us who are far from holiness? Yes, we can, I will answer this question, for we know that the Apostles of Christ became perfect and holy, alien to all spiritual and bodily filth, inaccessible to any temptations, but only after the miraculous descent of the Holy Spirit on them on the day of Pentecost.

We know other great people who have completely renounced ambition.

Is it really possible to admit that ambition led those great righteous men of the Russian land, whose holy relics to this day rest in the underground corridors of the Kiev Caves Lavra? The ambitious, of course, do not go into the darkness of the underworld, but strive to be visible to everyone in bright light and in high places. They are not afraid of the words of Christ: “How can you believe when you receive glory from one another, but do not seek the glory that is from God alone?” (John 5:44).

Any honor from people was unbearable to very many holy ascetics, who went farther and farther into the wilds of the forest, when the glory of their holy life led to them those who sought guidance.

And the blessed holy fools hated glory from people so much that they sought with all their might for something that is completely opposite to honor - ridicule, mockery, abuse and beatings - and for this they pretended to be devoid of mind.

Only a very few of God's chosen ones have reached such a height of humility and spiritual poverty, but we will come somewhat closer to them if we firmly remember the words of Christ: “He who loves his soul will destroy it; but he who hates his soul in this world will keep it for eternal life” (John 12:25).

How can you love your soul if it is full of lowly passions and ambition?

Oh no, no way, no way! You have to hate her. It is necessary with great attention to incline your ear to what Christ says next: “He who serves me, let him follow me; and where I am, there my servant will be also. And whoever serves me, my Father will honor him” (John 12:26).

Isn't it madness to prefer glory from people as sinful and unworthy as we are, to the immensely precious and eternal glory from the Heavenly Father Himself?

Let us hate glory from people and remember the word spoken by the Lord Jesus Christ: “...what is exalted among people is an abomination before God” (Luke 16:15).

Shall we really strive for what the demons of ambition inspire us, and what is vile before God, and shall we not follow the path of Christ, the path of suffering, for which His Heavenly Father will honor us?!

Let us not! May this not happen to us! Amen.