"Because God Loves You, He Kept You From Seeing What You Just Saw" (A Miracle of Saint Panagis Basias) 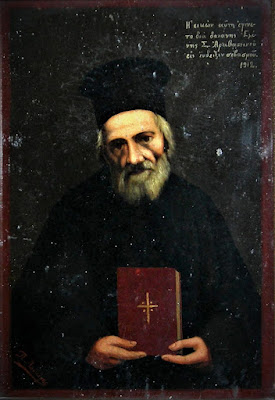 A Testimony of Gerasimos Drakopoulos
Regarding a Miracle of Saint Panagis Basias
When I was 12 years old, one night when I was sitting outside my father's goldsmith shop in the central square of Lixouri, some of his friends gathered - as every night - to chat. These were all the literate people of the city and most of the elderly.

That night the discussion revolved around the holiness and miracles of Papa-Basias [1801-1888] and each of them had a miracle to tell. Then, my late father told me an amazing miracle of Papa-Basias, which was experienced by my grandfather Vasilios Drakopoulos, lead chanter and composer of many church songs. The miracle is as follows.

In the days of Papa-Basias there lived in Argostoli a noble and very rich family, I do not remember exactly their name, which consisted of four people, the husband, the wife and two boys. This family was very pious and virtuous and even more so the lady, whose whole life was full of good works.

After a few years the man died and the widow was left with her two children. She then devoted herself to educating and advising her children in Christianity, while further enhancing her humanitarian work. She helped all the poor and sick when she visited their homes, visited the sick in the hospital, as well as prisoners to teach them Christianity.

When her first child turned twenty-one, one night sitting in the dining room after dinner, the child felt a severe headache and immediately fell down unconscious. After putting him to bed, they immediately called the doctor, who noticed the very serious condition in which the patient was in and prepared his mother for the fatal news.

The lady, when she heard what the doctor told her, took refuge at the iconostasis of the house and after kneeling she prayed all night to the Panagia for the salvation of her child. Unfortunately, however, her child died in the morning.

She, despite her mourning and great sorrow, continued her Christian and humanitarian actions. But a year later, one night as she was in the dining room with her other child, she suddenly heard him scream in pain and fall unconscious, just like her first son.

She immediately called the doctor, from whom she found out he had the same case as her first child and that there was no possibility of salvation. Desperate with what happened to her for the second time, the lady resorted again to the iconostasis with tears.

She remained there all night, and on her knees begged the Panagia and Saint Gerasimos to save her child, to take pity on account of her Christian works, and in return to give full health to her child. Unfortunately, the next day when the doctor came, she found out that the child had died.

The lady then was seized by rage and became a beast within a day! She stopped her previous actions, constantly cursed God and the Saints, while she no longer accepted anyone in her house. She then gave a good painter two photos of her children, and asked him to make life-size portraits of them.

When the painter handed her the portraits, the lady put luxurious frames on them and after emptying the furniture from her living room, hung them opposite each other, and covered them with tulle. In fact, under the portraits she put candlesticks with candles, which she lit every now and then, and looking at her children, she chatted with them.

One day Papa-Basias took a ship from Lixouri and went to Argostoli. When he got off the ship, he headed slowly to the lady's house leaning on his staff.

When he got to the house, he knocked on the door and the lady looked out the window. When she saw Papa-Basias, even though she did not know him, she went crazy and started cursing him with the most vulgar words. Nevertheless, Papa-Basias was not shaken at all and begged her three times to open for him so that he may say something to her.

But she kept cursing him more. And then Papa-Basias said to her:

"Either you open it for me or I will open it!"

With his staff he made the sign of the cross on the door, which opened automatically and Papa-Basias began to climb the stairs. When the lady saw this, she was speechless and could no longer utter a word!

Papa-Basias went straight to the living room (certainly illuminated by God), telling the lady to follow him.

After he opened the living room door, he told the lady to sit in the corner and she would see something she did not expect.

After Papa-Basias prayed, the lady saw the tulles rising from the portraits of her children, her children coming to life and standing in the middle of the room!

After that, the portraits were back in place, as if nothing had happened!

The lady was shocked by what she saw and was speechless!

And then Papa-Basias said to her:

"My Lady, because God loves you, He kept you from seeing what you just saw, and that is why He took your children through natural death. Your children had both loved the same woman and were going to kill each other the way you saw! For this reason, repent, thank God and continue your previous Christian activity."

Indeed, the lady repented and was given again, soul and body, to her previous action, and in fact on a larger scale!