Third Homily for the Sunday of the Paralytic (St. Luke of Simferopol) 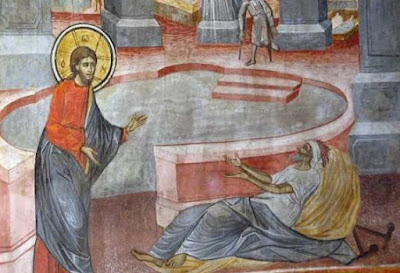 (Delivered in 1958)
Our Lord Jesus Christ came to Jerusalem for the feast. At the Sheep Gate of this city stood a pool, called in Hebrew Bethesda, which means "the House of Mercy". This pool was surrounded by five covered passages, in which lay a huge number of sick, blind, lame, withered, waiting for the movement of water, which from time to time was made by an angel descending into the pool. And then every sick person, who was first to descend into the water, was miraculously healed of their illness, whatever it was. Who, if not the Eternal Son of the God of mercy and the Father of bounties, should enter the House of Mercy?

Among the huge number of those sick lay for 38 years one who was already paralyzed, never being on time to be the first to enter the water upon its disturbance. The Omniscient Son of God approached him and asked if he wanted to be healthy. Quietly and meekly answered the unfortunate sufferer: “Sir, I have no man to put me into the pool when the water is stirred up; but while I am coming, another steps down before me” (John 5:7).

The Lord Jesus Christ, the Knower of the Heart and the Omniscient One, knew how great and immeasurable was the patience of this sufferer, knew how unshakable his hope in God's mercy was. We are also amazed by it, hearing the conversation of the unfortunate paralytic with the Lord Jesus. Who else in his place would have been lying at the pool for 38 years and would not have returned home, having lost his patience?! Who would not be convinced of the futility of his hope for a miracle of God? Who hasn't even murmured against God?! And he endured, he continued to hope, for his heart was meek and humble. And this granite pillar of faith, patience and hope still stands before the entire Christian world as an example to the faint-hearted.

And from the Lord Jesus Christ he received a reward for the meekness of his heart, a reward that was possible only for the Son of God, for he heard an order from Him, which only our Lord and Savior Jesus Christ could give: “Get up, take up your bed and walk” (John 5:8).

Let us recall what is written in the fourth chapter of the Evangelist Matthew: “And Jesus went about all Galilee, teaching in their synagogues and preaching the gospel of the kingdom, and healing every sickness and every infirmity among the people. And the news about him spread throughout all Syria; and they brought to Him all the weak, afflicted with various diseases and torments, and those who were demon-possessed, and lunatics, and paralyzed, and He healed them” (Matt. 4:23-24).

Why does the Evangelist Matthew speak so briefly about all this multitude of miracles of Christ? Why did the Apostle and Evangelist John the Theologian write in such detail about the healing of the paralytic at the pool near the Sheep Gate, and why is the fourth week of the Holy Pentecostarion dedicated to this miracle? We think that in the Divine light of the Resurrection of Christ, His last miracles, especially such bright ones as the healing of the paralytic, we perceive much more deeply than the earlier miracles of Christ, in which He also revealed Himself to the world as the greatest Wonderworker; so that the image of a sufferer is imprinted with special force in our hearts - a paralyzed man who managed to keep all the strength of hope in God's mercy for 38 years.

Bethesda - the House of Mercy - appears to us not as a place of miraculous healings of the sick in the body, but as a sinful world that requires spiritual healing, which was the goal of the incarnation of the Son of God, His preaching and the immeasurable saving power of His Golgotha Cross.

Let us give our whole hearts from the power of sin to our Savior, the Lord Jesus Christ, and with His all-powerful help let us go on a long path leading to the Kingdom of eternal glory, peace and joy, even though this narrow and stony path is difficult. Amen.