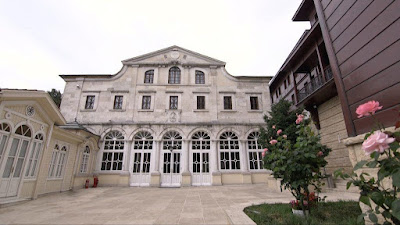 The Holy and Sacred Synod, meeting today, Monday, May 9th, 2022, under the chairmanship of His All Holiness Ecumenical Patriarch Bartholomew, discussed in detail the ecclesiastical issue of Skopje, and, evaluating in the final phase the submission to the Mother Church from that Church, as well as the other appeals of the State of Northern Macedonia, they have decided the following:

1) It accepts into eucharistic communion the Hierarchy, the clergy and the people under Archbishop Stefan of this Church, healing the wound of the schism, pouring over the wound of our Orthodox brethren "oil and wine". To this end, the relevant Patriarchal and Synodal Act is published.

2) They contacted the Most Holy Church of Serbia to regulate administrative matters between them and the Northern Macedonian Church, within the framework of the sacred canonical order and ecclesiastical tradition.

3) It recognizes as the name of this Church that of "Ochrid" (understood to be in the area of this jurisdiction only within the boundaries of the territory of the state of Northern Macedonia), as it was promised in writing to the Ecumenical Patriarchate and its Primate, excluding the term "Macedonian" and the other derivative of the word "Macedonia".

The Ecumenical Patriarchate continues to be interested in the increasing, progress and stability of this ecclesiastical reality of Ochrid, as it did throughout the centuries through all the local Orthodox Churches, as "the inn of love, the source of the piety of the Nation of Orthodox Christians" (Pavlos of Drama).

From the Patriarchate, 9 May 2022
By the Chief Secretary
of the Holy and Sacred Synod
Source: Translated by John Sanidopoulos.
John at 11:32:00 AM
Share
‹
›
Home
View web version