On the 19th of this month [May], we commemorate the Holy Thirteen Venerable Martyrs and Confessors of the Monastery of Kantara in Cyprus, John, Konon, Jeremiah, Markos, Kyrillos, Theoktistos, Baranabas, Maximos, Theognostos, Joseph, Gennadios, Gerasimos and Germanos, who in the year 1231 under the Latins had their end by fire.

Revered assembly, Champion Fathers,
You contested radiantly, against the Latin-minded.
On the nineteenth, the thirteen went to heaven together.
In 1228, when Cyprus was subject to the Latins, and the Orthodox were in many ways deprived of their faith, two God-bearing ascetics, John and Konon, came to Cyprus from Pamphylia in Asia Minor, and having first entered the Monastery of Machairas, they then settled in the abandoned Monastery of Mount Pentadaktylos called the Theotokos of Kantara, where they struggled in asceticism and piety and all means of philanthropy. With them there joined nine other monks - Jeremiah, Markos, Kyrillos, Theoktistos, Barnabas, Maximos, Theognostos, Joseph and Germanos.

The Latin Archbishop Eustorgios sent there two representatives, Cardinal Andrew and Cardinal Hiliermon, in order to persuade the Fathers with the brotherhood of Kantara to concelebrate with them and use unleavened bread for the Divine Liturgy. The Fathers of Kantara received the two Latin Cardinals with honor, and later the Latin Cardinals inquired as to why they settled in the monastery. In the course of their cordial conversation, they also asked what they thought about the fact they used unleavened bread during their Mass. The Fathers respectfully replied that this was not the tradition of the Apostles and Fathers, which is why they adhere to the tradition of using leavened bread during the Divine Liturgy. They also issued a challenge to the two Cardinals, for one to celebrate the Divine Liturgy with unleavened bread and the other with leavened bread and then for both to enter a burning fire, and the one who remained unharmed would be the one who celebrated correctly.

This response unnerved Cardinal Andrew, and ordered the eleven monks to stand before the Latin Archbishop in Lefkosia. There they were joined by two monks from Machairas Monastery - Gennadios and Gerasimos - making them thirteen in total. When the thirteen Fathers stood before the Latin Archbishop, they were sentenced to a three year imprisonment. During this time, Monk Theognostos died.

After his death, the remaining twelve monks stood before the Latin Archbishop, where they steadfastly upheld to the Orthodox tradition and practice of using leavened bread in the Divine Liturgy. For this, the holy inquisition ordered the twelve monks to be tortured and put to death.
After they removed from them their monastic schemas, they tied their feet to horses and were dragged naked over the sharp stones of the Pedieos River. They were then stoned and struck with wooden clubs. When their torments were completed, they cast their cut up bodies into a burning fire.

When Patriarch Germanos II of Constantinople learned about the fate of the thirteen monks from Kantara, he send a sealed epistle to Pope Gregory IX to inform him of the barbaric behavior of the Latin occupiers of Cyprus with its ecclesiastical representatives. 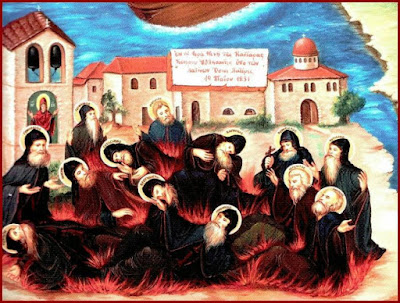 Apolytikion in the First Tone
Let us honor the three and ten armed warriors and Venerables, of the Monastery of Kanatara with hymns, who mightily rebuked the unleavened bread of the Latins, making clear the correct dogmas, to the point of spilling their blood, leaving off a life of corruption, as a confession crying out: glory to you who strengthen us, glory to you who are sanctified, glory to you who teach us all to be minded with the true faith.

Kontakion in the Fourth Tone
A joyous feast, for the divine memory, of the Fathers today, let us celebrate brethren, and with gladness let us say: O revered assembly rejoice.

Megalynarion
Rejoice divine chorus of Kantara, all-renowned Venerable Martyrs of the Lord; rejoice Fathers who in asceticism and contest, the thirteen in number, shined as an assembly.
John at 5:45:00 PM
Share
‹
›
Home
View web version