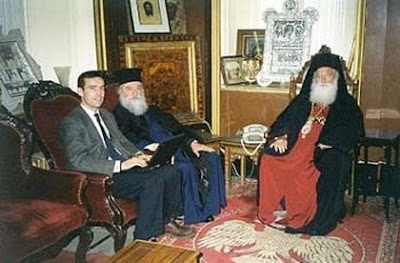 Interview with His Beatitude Patriarch Diodorus I on the
Miracle of the Holy Fire
By Niels Christian Hvidt
His Beatitude Patriarch Diodorus I was born in 1923. He first came to Jerusalem in 1938 and assisted the Miracle of the Holy Fire ever since. In 1981 he was elected Patriarch and was thus the key witness to the Holy Fire 19 times until his death in December 2000, as the Greek-Orthodox patriarchs always enter the little tomb chapel where the flame first occurs. I spoke with him at the Orthodox Easter, 2000.

"Your Beatitude, what actually occurs when you enter the tomb on Holy Saturday during the ceremony of the Holy Fire?"

"After all the lights are extinguished, I bow down and enter the first chamber of the tomb. From here I find my way through the darkness to the inner room of the tomb where Christ was buried. Here, I kneel in holy fear in front of the place where our Lord lay after his death and where he rose again from the dead.

Praying in the Holy Sepulchre in itself for me is always a very holy moment in a very holy place. It is from here that he rose again in glory and spread his light to the world. John the Evangelist writes in the first chapter of his gospel that Jesus is the light of the World.

Kneeling in front of the place where he rose from the dead, we are brought within the immediate closeness of his glorious resurrection. Catholics and Protestants call this church "The Church of the Holy Sepulchre." We call it "The Church of the Resurrection". The resurrection of Christ for us Orthodox is the centre of our faith, as Christ has gained the final victory over death, not just his own death but the death of all those who will stay close to him.
I believe it to be no coincidence that the Holy Fire comes in exactly this spot. In Matthew 28:3, the Gospel says that when Christ rose from the dead, an angel came, dressed all in a fearful light. I believe that the intense light that enveloped the angel at the Lord's resurrection is the same light that appears miraculously every Easter Saturday.

Christ wants to remind us that his resurrection is a reality and not just a myth; he really came to the world in order to offer the necessary sacrifice through his death and resurrection so that man could be re-united with his creator.
In the tomb, I say particular prayers that have been handed down to us through the centuries and, having said them, I wait. Sometimes I may wait a few minutes, but normally the miracle happens immediately after I have said the prayers. From the core of the very stone on which Jesus lay an indefinable light pours forth.

It usually has a blue tint, but the colour may change and take on many different hues. It cannot be described in human terms. The light rises out of the stone as mist may rise out of a lake - it almost looks as if the stone is covered by a moist cloud, but it is light.

This light behaves differently each year. Sometimes it covers just the stone, while other times it gives light to the whole sepulchre, so that people who are standing outside the tomb and look into it see the tomb filled with light. The light does not burn - I have never had my beard burnt in all the sixteen years I have been Patriarch in Jerusalem and have received the Holy Fire. The light is of a different consistency than the normal fire that burns in an oil-lamp.
At a certain point the light rises and forms a column in which the fire is of a different nature, so that I am able to light my candles from it. When I thus have received the flame on my candles, I go out and give the fire first to the Armenian Patriarch and then to the Coptic. Thereafter I give the flame to all people present in the Church." 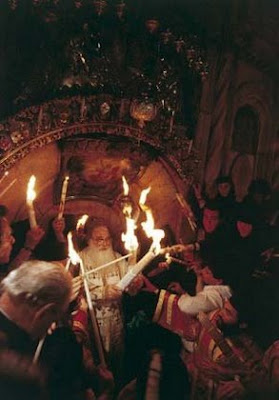 "How do you yourself experience the miracle and what does it mean to your spiritual life?"

"The miracle touches me just as deeply every single year. Every time it is another step towards conversion. For me it is of great comfort to consider Christ's faithfulness towards us, which he displays by giving us the holy flame every year in spite of our human frailties and failures. We experience many wonders in our churches, and miracles are nothing strange to us.

It happens often that icons cry, when Heaven wants to display its closeness to us; likewise we have saints, to whom God gives many spiritual gifts. But none of these miracles have such a penetrating and symbolic meaning for us as the Miracle of the Holy Fire. The miracle is almost like a sacrament. It makes the resurrection of Christ as real to us as if he had died only a few years ago."
Source
John at 11:26:00 AM
Share
‹
›
Home
View web version