Homily for the Sunday of the Blind Man (St. Luke of Simferopol) 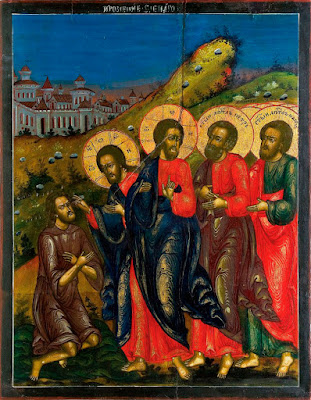 (Delivered on May 10, 1953)
You heard today the Gospel story about one of the greatest miracles of Christ - the healing of a man born blind. Much could be said about this, and I've been talking about it for years. Today I want to talk about what I did not speak about, about those words of Christ, full of great significance for us, which He spoke after the healing of the blind man. He said:

“I came into this world for judgment, so that those who do not see may see, and those who see will become blind” (John 9:39).

He said about Himself: “I am the light of the world. Whoever follows Me will not walk in darkness, but will have the light of life” (John 8:12).

He showed the world that they are deeply, deeply mistaken, considering themselves to be seeing when they are in fact completely blind, spiritually blind. He came in order to bring to the world a teaching that would reveal spiritual light to all those who were considered blind, who did not understand anything.

They believed in what He said, they saw the light that He brought to the world, they felt and accepted the light brought by the Lord Jesus Christ in their hearts.

They believed, they loved, they followed Christ, they began to fulfill the commandments of Christ with all diligence, and for this they became close to the Lord, became friends of Christ and even brethren of Christ.

They rejected Christ, rejected His commandments, rejected the path that He showed.

They did not love Christ, and therefore they did not unite with Him in their hearts.

These are the seers who have become blind. These words of Christ were heard by some of the Pharisees who were present during the conversation of the Savior with the healed blind man. And they asked the Lord: “Are we blind too?” Jesus told them, “If you were blind, you would have no sin in you; but as you say you see, the sin remains.”

The words are not easy to understand, words that I must explain to you. What does "If you were blind, you would have no sin" mean?

If you were really ignorant, blind people, then the sin of not believing in Me would not be imputed to you.

You should have first received your sight, first believed in Me, and then there would be no sin in you, you would be in the light.

"But as you say you see, then the sin remains."

The sin is that you did not believe Me, that you were indifferent, that your hearts were petrified when you saw countless miracles, when you listened to My words, My teachings.

It is precisely because everyone saw and heard this, and yet did not believe in Me, considering themselves to have sight, that your sin remains in you, and you, of course, will remain forever blind.

As you can see, after the Lord Jesus Christ healed the bodily eyes of the man born blind, He now speaks to the Pharisees about spiritual blindness, and this must be understood.

Have you ever heard of such a light that darkness could not embrace? No, you have not heard of such a thing, for any physical light can be enveloped in darkness, it can become invisible, but the light of Christ, which He brought to the world, cannot be embraced by darkness, it shines in the darkness, no matter how thick this darkness is.

The unfortunate ones who remain in spiritual darkness are all those who do not want to know the true light, the only true Divine light, which the Lord Jesus Christ brought to people.

Not knowing this light, all evil people are in constant darkness, all those who hate their brothers and sisters, all blasphemers, liars, slanderers, unclean people, defiled by fornication and adultery, and above all, all proud people, completely devoid of humility, for they cannot be close to Christ, all those who follow their own path, and not the path indicated by Him, cannot believe in Him - all the workers of iniquity, all the unmerciful, and, of course, all the thieves, all the unfortunate bandits.

And for us, to whom the Lord Jesus Christ opened the way to salvation, shouldn’t we remember, forever remember the words of Christ in response to the Pharisees who asked Him if they were blind too: “If you were blind, you would not have sin in yourselves; but as you say you see, the sin remains.”

Do not think that if you were baptized in the name of the Holy Trinity, if you confess your sins, if you repeatedly partake of the Body and Blood of Christ, if you perform all the rites of the Church, if you pray often - do not think that you are no longer in darkness, do not be presumptuous.

Look, look closely every day in your heart, if there is any darkness there. And if you see even the slightest darkness there, immediately disperse this darkness with tears, bitter tears. Amen.