First Homily for the Sunday of the Paralytic (St. Luke of Simferopol) 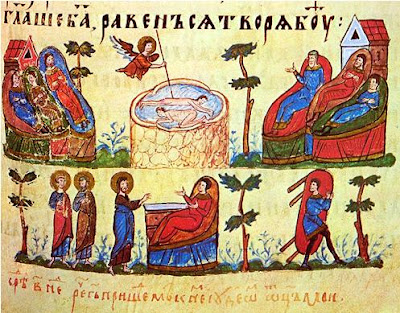 By St. Luke, Archbishop of Simferopol and All Crimea
(Delivered on April 30, 1950)
"There is a pool in Jerusalem at the sheep gate, called in Hebrew Bethesda, in which there were five covered passages. In them lay a great multitude of the sick, the blind, the lame, the withered, waiting for the movement of the water. For the angel of the Lord went down at times into the pool, and disturbed the waters; and whoever first entered it after the disturbance of the water, recovered, no matter what disease was possessed" (John 5:2-4).

I think that the whole world, that all mankind is like this pool of Bethesda: you need to know that this Hebrew word means "house of mercy." In it, in this house of mercy, lay many sick, crippled, lame, blind.

This is the image of our world. Is there not in it a huge number of sick people who lay at the pool at the Sheep Gate: lame, crippled, blind, withered and paralyzed?

Oh, how many, oh, how infinitely many! And how they long for healing! But even for them there is still a "house of God's mercy."

But there are still immeasurably more spiritually ill, seriously ill!

How many are there limping on both knees, barely tottering, often stumbling and falling on the paths of their spiritual life!

Oh, how many spiritually blind there are, often even intentionally blind, who hide and close the eyes of their hearts so as not to see the Divine light of Christ!

But are there really a few people among us with a withered soul, never irrigated with the dew of God's grace? Their heart dries up, as the earth dries up, not irrigated by God's rains.

But if the world is like a sheep’s pool in terms of the multitude of those who are sick in body and spirit, thirsting for healing, as they were waiting for the disturbance of the waters, then it can also be called a house of mercy, for in it God’s infinite mercy is poured out on the unfortunate and sinful human race. Sometimes this manifests itself as clearly as the disturbance of the water in the sheep's pool, when, after cruel years of famine, God blesses perishing people with a rich harvest, or when, with great upheavals of national disasters, the horrors of wars, the Lord stops peoples who have lost their way on the paths of wickedness, self-will and pride, close to destruction, of which we see so many examples in the Old Testament history of the people of Israel.

And not only in historical events, but even more so in the lives of individuals, God's mercy and concern for the healing and salvation of the perishing is manifested. But salvation and deliverance are received only by those who always follow the works of God with great attention and hasten to take advantage of God's mercy.

Just as those lying at the sheep's pool were always focused on their suffering and with intense attention awaited the moment of disturbance of the water, so we, sick of spirit, should always be focused on what is happening in our soul, and not miss those great moments when, like a disturbance of water in the sheep's pool, we will feel the quiet voice of the guardian angel, offering us healing in repentance and tears.

Only those who are always vigilant over their hearts will not miss the moment of God's mercy and receive healing, like those who first entered the water in the sheep's pool when the angel disturbed it.

For those who are late, whose eyes are heavy, whose hearts are closed, who either absolutely do not want to see the mercy of God or see with difficulty - they are late and remain unhealed, just as those who did not have time to enter the sheep's pool first remained unhealed after the descent of the angel of the Lord.

The doors of mercy are open to all who shudder from the weight of their sins, and, bowing their heads low, beating their breasts, repent before the Lord.

I must recall the even more decisive and difficult words of the Apostle Peter: “If, having escaped the filthiness of the world through the knowledge of our Lord and Savior Jesus Christ, they again become entangled in them and are overcome by them: then the last is worse for such people than the first.

It would be better for them not to know the path of righteousness, than having known it, to turn back from the holy commandment given to them. But according to a true proverb, this happens to them: the dog returns to his vomit, and the washed pig goes to wallow in the mud" (2 Pet. 2:20-22).

Let us therefore keep in our hearts the words of the Lord Jesus Christ, spoken by Him to the healed paralytic: “Sin not, lest something worse happen to you.”