When Saints Raphael, Nicholas and Irene Appeared to our Holy Father John Kalaides 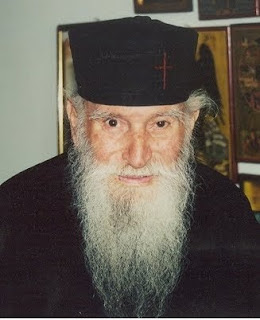 By Miltiades Tsesmetzes,
Teacher in Serres
During our visit to Fr. John Kalaides, he told us how he met the three new saints Raphael, Nicholas and Irene, and since then his life has been completely connected with them! He said to us:

"In 1987, when I was in Neochori, I was suffering from renal colic. It was then that I received a package, without a return address, which contained the book of Photios Kontoglou (A Great Sign), regarding the lives of the three newly-appeared Saints and the miraculous events surrounding the finding of their holy relics. Reading it I was amazed by their shocking martyrdom and contacted the abbess of the Holy Monastery in Mytilene. I asked her to send me oil from the lamps of the Saints, along with holy water and certain books containing their miracles. The abbess Eugenia sent them to me and I began to cross myself with these blessings, as well as to read the books of the Saints (Fr. John always read sacred books standing up!). When a Supplicatory Canon was chanted to Saint Raphael, at the end of the service I would read to the faithful the miracles of the Saints.

One day I was with the presvytera in the living room of the house, on the sofa, and I saw two priests come into the room and cense us! By the time I got up, as I was surprised to see them, the priests went to the door and disappeared!

I said then: 'Who were these priests? Hey, it was the Saints (Raphael and Nicholas)!'

One week after this shocking event and while I was reading, a little girl appeared in the same place with a white dress and pigtails! She said to me: 'Father John, what do you have?'

I told her that I was suffering from renal colic and that the pain was unbearable. Then she said to me: 'Come to Mytilene and you will be fine. I also live there.'

Then I realized that it was the third of the new Saints, the holy virgin martyr Irene!

After a few days we went with our parishioners to Mytilene and we saw many moving miracles performed by the three new Saints!"

Fr. John was healed and never suffered from the same problem again! He made a total of 20 pilgrimages to Mytilene with his parishioners and other believers and in 2001, when God found us worthy to follow him, audiovisual material was collected, which will be published in future posts. (Already, his speeches and the pilgrimage to the Holy Taxiarchis of Mantamados, have been published).

Let us have his holy blessing, as well as those of the three miraculous saints Raphael, Nicholas and Irene!