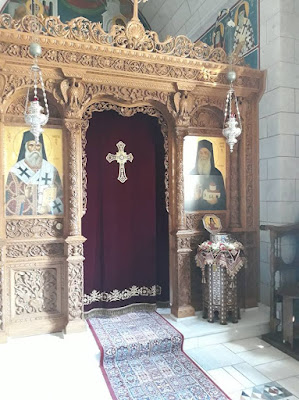 By Fr. Demetrios Kabbadias
With his humility, Saint Amphilochios Makris won the trust of Saint Nektarios. He had been visiting him frequently since then. When Elder Amphilochios became a Deacon, they concelebrated many times.

Their souls were united even more during the last liturgy they performed a year before the death of Saint Nektarios. Their spiritual union became more intense when the Saint instructed him to take a sick nun to her cell.

This spiritual friendship and love continued even after the repose of Saint Nektarios.

In 1958, due to diabetes, a dangerous abscess was created in the Elder's leg. The doctor and the nuns were worried about the development of the abscess, when they heard the Elder calmly saying to his attendant:

"Ignite the censer, Sister Agathi, and bring up the relic of the Saint."

He blessed his leg with the sign of the cross and said:

"You, my Saint Nektarios, who heals the world, heal me also, your friend."

The next morning the doctor who came to operate on the abscess found that it had completely subsided.

The Elder gratefully dedicated a church to the name of Saint Nektarios, which celebrates every year the memory of the miraculous Saint.