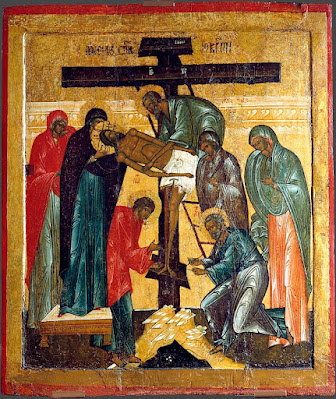 (Delivered on April 4, 1953)
Thus ended the most terrible and greatest drama in the history of the world. The most pure Body of our Savior hung lifelessly by the torn wounds from the nails. The head of the dead man sank low on the chest. And so it hung for a long time.

Already dispersed, beating their chests, were those accursed ones who crucified Him, while the body hung and hung - hung for a long time ... It hung, until the blessed secret disciples of Christ, the "Pharisees" Joseph and Nikodemos, came, and removed the bloody body of the Savior from the cross, and they laid it on a clean linen spread on the ground, washed the blood and dirt off, and laid it on another shroud, clean and dry.

Behold, before you is the shroud with the body of Jesus... O our Lord, Lord! Why is this? How could this happen?! Didn't He say to His apostle Peter when in the Garden of Gethsemane he cut off the ear of the servant of the high priest: “Put your sword back in its place, for all who take the sword will perish by the sword. Or do you think that I cannot now implore My Father, and He will present Me more than twelve legions of angels?" (Matthew 26:52-53).

He voluntarily, voluntarily - remember this word for the rest of your life - completely voluntarily underwent a terrible execution, gave His life for the life of the world on the cross.

Tell me, when did this happen before Christ? When was it possible that someone who had the power to avoid trouble, to avoid even the death penalty, would not use this power of his? When did it happen that a person voluntarily went to his death? It was after Christ, it was with many of the martyrs of Christ, but before Christ it never, ever happened.

Tell me, is it possible to imagine that a huge lion, the king of beasts, would dutifully give himself up alive to be torn to pieces by crafty foxes and hungry rats? No no! This is impossible: from one of his terrible growls, from his roar, all would have fled in fear.

Soon in the Paschal canon you will hear about another Lion, the Lion from the tribe of Judah. Who is this lion? This is the Lord Jesus Christ, this is the Lion, possessing infinitely, incalculably greater power than the lion, the king of beasts. This is the Creator and Lord of all creation, this is the Almighty.

And this Lion, at whose voice the earth and the sea would tremble, voluntarily gives Himself into the hands of the accursed foxes - the scribes, Pharisees and Sadducees: "He is led like a sheep to the slaughter, and like a lamb before his shearers is silent, so he does not open his mouth."

Why, why, why was it? Why did the Lion from the tribe of Judah, our Lord and God Jesus Christ, endure such a terrible execution? We find the answer to this in the 3rd chapter of the Gospel of John, in the conversation of Christ with Nikodemos; there we read the following words: “God so loved the world that He gave His only begotten Son, that whoever believes in Him should not perish, but have eternal life” (John 3:16).

And so, love, boundless love, measureless love, like a bottomless ocean, Divine love, Divine compassion for the death of all mankind were the reason that the Son of God, Christ our God, voluntarily gave Himself to a terrible death.

He showed with His cross such immeasurable, such boundless love, such as no one - no one could even imagine. For love, Divine love moved Him to do what He did.

And so, love for us, the accursed, for us, the worthless, for us, the perishing, prompted our Savior to endure the terrible torments of Golgotha. Is it only love? No, not only, for even the ancient prophet Isaiah, 700 years before the birth of Christ, wrote about Him as if He were His contemporary, as if he saw and knew all the most important events of Jesus' life, and said: “The punishment of our world is on Him. By His wounds we shall be healed."

So, on the one hand, there is the immeasurable love of God, and on the other hand, the justice of God.

Thus, the bottomless abyss of sins that were created before the coming of Christ and that are created after His coming cannot go unpunished.

It is impossible, impossible to leave unpunished all the abominations, cruelties, meanness, murders, adultery, all the impurity of the human race.

It was necessary that these sins be expiated in a way incomprehensible to us.

God, a Trinity in Persons, in His eternal Council found a means to ensure that the sins of the world would not go unpunished: He laid them on His Son, on the Lord Jesus Christ. "And He bore our sins, and was tormented for our transgressions."

Oh, how to understand, how to comprehend this? This is terrible, it cannot be comprehended, this is one of the greatest mysteries of God. And the human mind will never be able to understand why and how it was necessary for Christ the Son of God to be so terribly wounded for the sins of the world.

But in the prophet Isaiah we read in the 65th chapter: “My thoughts are not your thoughts, nor your ways My ways.” Even the greatest of theologians, the great Gregory the Theologian, thought deeply about this question. This question troubled him, but even he could not give an answer to it.

Will we, with our insignificant minds, dare to try to resolve something that Gregory the Theologian himself did not resolve?!

Shouldn't we, with humility, with deep reverence, know and remember forever one thing - that Christ's death on the cross was a voluntary death for our sins - for my sins, for your sins, for the sins of our fathers.

(Last words with an earthly bow before the Shroud).