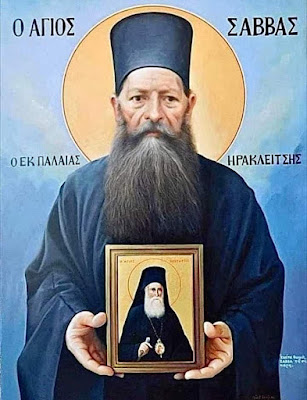 The following was written by Elder Abimelech Mikragiannanitis (1860-1965), who was the first to propose the canonization of Saint Nektarios and was the first to compose a Divine Office in his honor.

Saint Savvas of Kalymnos was the one who painted the first icon of Saint Nektarios! In 1918 he went to Aegina, where he ministered to the Saint that we celebrate today until his repose. His cohabitation with Saint Nektarios contributed greatly to the further spiritual progress of the Saint.

He got to know the strict asceticism of our Saint, the confrontations he had with lesser people, but also His proverbial humility and simplicity.

He saw his divine repose, which confirmed the pleasure the All-Good God had in him, with the obvious signs of the Holy Myrrh and the fragrance, but mainly of the miraculous grace.

Until then, Saint Savvas was a monk in Jerusalem, but when he came to Athens for iconography materials (for the handicraft he loved so much), he was informed that Saint Nektarios, Metropolitan of Pentapolis, was LOOKING for him.

He went to Aegina and served the Saint until the day of His repose!!!

He experienced the first miracle of the Saint, when after his repose he saw the Saint leaning his head forward in order for Saint Savvas to put on his stole, and then it returned to its place.

For three consecutive days the sisters of the monastery in Aegina listened to conversations from the tomb of the Saint, and when they approached, they saw Saint Savvas talking to Saint Nektarios.

The Saint remained locked in his cell for forty days.

On the fortieth day he came out of his cell holding an icon of Saint Nektarios, which he handed over to the abbess with the order to place it in the veneration shrine!

The abbess replied that this could not be done because the Saint had not been officially recognized by the Church and such an action might put the monastery in persecution.

Then Saint Savvas said to her emphatically: "It will benefit you to obey. Take the icon, put it in the veneration shrine and do not to wonder about the will of God."
[He stayed in Aegina till 1926, after which he went to Kalymnos.] 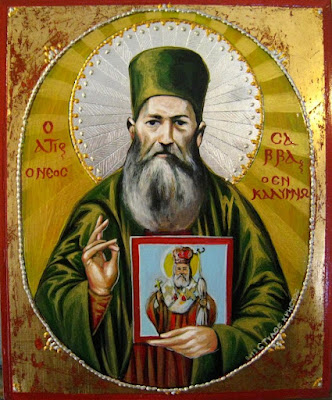 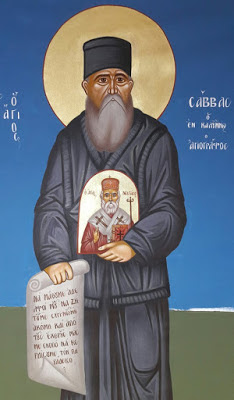 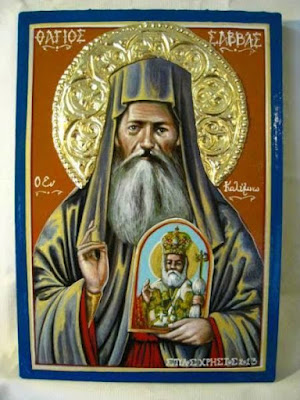 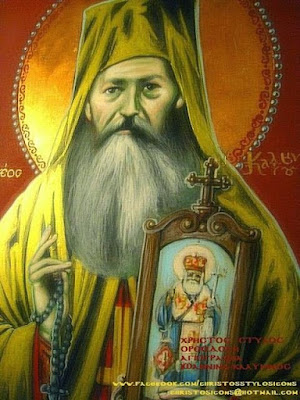